On February 2, 2005, Kevin Pietersen blazed his way to a magnificent century, his first in ODIs in the nation he originally belonged to. The game also saw AB de Villiers make his debut, but what it will long remembered for is its outcome.

It wasn’t an ideal start to the series for South Africa. In their own backyard, at Johannesburg, they were trumped by a depleted English side that was without the services of Andrew Flintoff during the first ODI. His replacement, South African-born Kevin Pietersen, played a brief but steady innings during that rain-curtailed game.

The next fixture at Bloemfontein saw Pietersen walk out to bat when England’s score read 67 for 3. The young lad from Pietermaritzburg — a location that was just a few hundred kilometers from the venue of the second ODI — now had the opportunity to carve a niche for himself by representing his adopted country.  Despite the initial tentativeness, Pietersen subtly started to get on top of the bowlers. He shuffled, pummeled and swept on a regular basis. A lofted shot over the inner-circle off Justin Kemp for a couple brought him his half-century. Then began the acceleration.

Andre Nel was at the receiving end of Pietersen’s willow, as the latter consistently threw him off his line and length. It was in Nel’s over that Pietersen reached his maiden ODI century, a feat he celebrated by planting a kiss on the England badge on his helmet. However, the large crowd at Bloemfontein had responded by turning their backs on the South African-born Pietersen as he walked off post his majestic innings.

The last three overs bowled by Makhaya Ntini and Nel produced 31 runs and the Englishmen finished formidably on 270 for 5. Despite the impressive score, and considering the fact that the South African batting line-up surrendered rather meekly during the first ODI, the visitors could in no way afford to take their foot off the pedal, since apart from Darren Gough and Matthew Hoggard, their bowling didn’t have the ammunition to flummox the opposition.

Moreover, it wouldn’t be an arduous task to chase 271 for victory when a side boasts hitters the likes of Graeme Smith, Jacques Kallis, Herschelle Gibbs and Justin Kemp. To bolster the line-up, a debutant in the form of AB de Villiers had been roped in to open alongside Smith. Together, the duo began cautiously but succumbed in an effort to quicken the scoring rate. Thereafter, Kallis and Gibbs were a thorn in the flesh of the English bowlers. They thwarted every attempt by the latter and added 134 runs in the next 26 overs. Michael Vaughan, England’s skipper, had tried almost all available options to break the stand, but they turned out to be futile.

At 185 for 2 from 38 overs, the hosts were on course to level the series. However, South Africa’s history of snatching defeat from the jaws of victory is well documented, and thoughts of yet another collapse would have popped up — albeit fleetingly — in the minds of many, when Kallis held out to Marcus Trescothick off Ashley Giles. A 50-run partnership ensued between Gibbs and Kemp after the exit of Kallis, and at 235 for 3 from 45 overs, it appeared as though the match was safely tucked away, since 36 from 30 balls for victory would rarely pose a threat, especially with Mark Boucher due to come in at the fall of the next wicket.

Gibbs fell and Kemp soon followed, but Boucher and Pollock consolidated to get South Africa 8 runs closer to the target, with one over remaining. The inexperienced Kabir Ali was given the responsibility to constrain the runs.

Below is how the 50th over panned out. South Africa needed 8 to win off 6 balls.

Ball 1: Kabir to Boucher: Full toss above the waist and Boucher pulls it behind square to the boundary. Umpire Simon Taufel quickly calls it a no-ball. South Africa are now just three away from victory with a full over intact. The Bloemfontein crowd, understandably, goes berserk. Ali’s poor run in the match continues and all hope is now sucked out from the visitors’ camp.

Ball 1: Kabir to Boucher:  Yet another full toss, but well below the waist. Boucher pulls it towards the square, but Ashley Giles catches it comfortably at the boundary. Boucher’s innings comes to an end against the run of play, but South Africa’s grip around the match hadn’t loosened, since Shaun Pollock, batting on 16, had crossed over. They now need 3 to win off 5 deliveries.

Ball 2: Kabir to Pollock: Full and on the off-stump. Pollock attempts to carve it through the off and misses. Wicket-keeper Geraint Jones collects the ball and appeals in vain. No run is conceded though, which is what would have pleased England. South Africa still needed 3 to win off 4 balls.

Ball 3: Kabir to Pollock: Ali gets his length right this time, aiming at the base of the middle stump. Pollock makes room and plays it through cover to snatch a single. The new batsman, Ashwell Prince, takes guard and is assigned the responsibility of scoring 2 from 3 deliveries to secure a win.

Ball 4: Kabir to Prince: Ali bowls it short of good length and Prince dabs it to the leg side and sets off looking for a single. Ian Bell swoops in to collect the ball and passes it to the bowler at non-striker’s end, trapping Prince short of his crease. Pollock crosses over, but the South Africans are now 7 down, requiring 2 to win off 2 balls.

Ball 5: Kabir to Pollock: Pollock swings at a good length delivery but fails to middle it. The ball drops slightly away from the pitch but the batsmen scamper through for a single. Scores are level. It’s now up to new man Andrew Hall to score the winning run off the final ball.

Ball 6: Kabir to Hall: Keeper Jones comes close to the stumps. The fielders in the inner-circle are all on their toes to try and prevent the single. Ali bowls full and on the off stump – an apt and brilliant length for the situation. Hall misses but doesn’t comprehend the location of the ball. He impulsively comes out of the crease, and Jones flicks the bails to snatch a stumping. The match is tied, but the English players go berserk with joy, for they saved a game that hardly belonged to them during the second half.

The South Africans were understandably devastated. This was their fifth game that ended in a tie in less than six years. They now needed to win four of the remaining five matches to win the series – which they eventually did against expectations.

It was an ODI that had all the makings of a potboiler. Pietersen’s maiden century, de Villiers’ debut and a tied-match. The cricketing world couldn’t have asked for more. 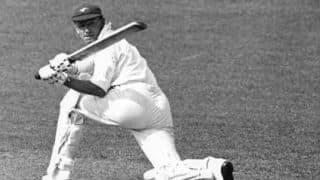