Kumar Sangakkara's rich form made the fans flock the stands at Mission Road Ground, Mong Kok, especially on the day of final.

Cricket Hong Kong have high hopes pinned on Hong Kong T20 Blitz. Each year it only seems to grow bigger and the tournament has done its bit to bring Hong Kong on the cricketing maps. For an Associate Nation to pull off an event of Blitz stature has received accolades from quarters.

Kumar Sangakkara too heaped praises on the tournament, calling it an enjoyable experience. However, he raised concerns over the tight scheduling that led to his side playing for five consecutive days.

Really good. Really enjoyable and players have been very well looked after, so a lot of positives, Sangakkara said. Five games in five days, so scheduling is a bit of issue. Short tournament is a good tournament, but maybe a couple of days in between to give the boys a rest.

Sangakkara was the biggest attraction in this edition of Blitz. His rich form made the fans flock the stands at Mission Road Ground, Mong Kok, especially on the day of final that witnessed a full house.

Galaxy Gladiators Lantau, led by Sangakkara, finished runners-up in the tournament, losing the final by six runs to Hung Hom Jaguars. Sanga, who kept wickets for 100 overs and played the most number of balls in the tournament, showed no signs of fatigue.

Earlier, during the tournament, CricketCountry asked Sanga about the cramped scheduling of the tournament. Exhibiting a positive mindset, the Sri Lankan had said, It is what it is (the scheduling). The important thing is to not complain and get on with the job. We have played enough cricket to understand what to do. And sometimes playing consecutive games helps.

Sanga walloped 92 against Jaguars in the league game and smashed 94 not out against City Kaitak on Saturday. Even if he had got to a three-figure mark, it wouldn t have been counted in his T20 records.

Unlike the popular national franchise-based leagues of India, Pakistan, Bangladesh, West Indies and Australia, the Blitz matches do not get Twenty20 status and is categorised as other T20s .

Considering the quality of players appearing in the Blitz, is it time for ICC to grant the matches T20 status?

I really think it s about how they (ICC) view the quality of the tournament, especially the local players on the quality that they bring. There are some great internationals that are playing. I am sure it (the T20 status) will come and vindication of the tournament is actually the cricket that is being played. As long as the cricket is of high quality, the status will slowly come, Sanga said.

Having retired from international cricket in 2015, Sangakkara has been an active player around the world in domestic leagues. He will play for new franchise Multan Sultans in the third edition of the Pakistan Super League (PSL), starting later this month. 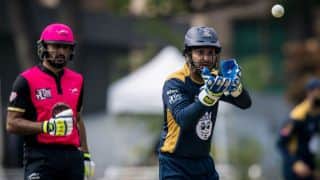