Lionel Messi and Virat Kohli —Both champions, heroes for their respective nations. Both are role models for aspiring sportsmen. Both have achieved unbelievable success at a young age. Yet, they have a sense of void in their respective careers. While Kohli has won all the ICC trophies playing for India, he is yet to replicate the same success with his Indian Premier League (IPL) franchise Royal Challengers Bangalore (RCB). In Messi’s instance it is the other way around. Messi has won every possible trophy (that too numerous times) with Barcelona, but has failed to win a major title in the blue-white Argentine jersey. However, Kohli still has a chance to add an IPL trophy in his resume, while Messi, who probably blames himself for Argentina’s loss in Copa America Final 2016, has shut doors for himself! READ: Lionel Messi retires from international football!

Messi’s dramatic retirement following Argentina’s defeat against Chile in the final of Copa America 2016 demonstrates the FC Barcelona-star as the ultimate victim of the Club vs Country debate in football. Despite of his incredible contribution for Argentina, he has been at the receiving end of constant criticism from his countrymen for not delivering the same success as he has done for his Spanish club, Barcelona. Messi played 3 finals with Argentina in the last three years and went on to lose all the matches. Overall, the 29-year-old footballer played a total of 4 finals (Copa America 2007, 2015, 2016 and FIFA World Cup 2014).

Kohli likewise has played in 3 finals for RCB (2009, 2011 and 2016) and lost all the ultimate battles with the last one as RCB’s skipper. However, the fans make a whole lot of difference here. While Kohli continues to receive the love and RCB fans’ belief, Messi unfortunately is not as lucky as the cricketer in this case. The Argentine fans and the football association have been no support for the talented footballer who every time finds himself as Argentina’s one-man army. Football being a team game, he might take Argentina to the final, but he requires a strong team to win it. [Believe it or not, Argentina have been sorely dependent on Messi.]

Both the players have been extremely passionate for their respective sport. There have been a number of occasions when the duo has chosen to play in spite of injuries. One such example from Messi came recently in the concluded Copa America 2016. The ardent Messi followers are aware of how much Messi hates to sit on the bench when he is just inches away from being fit and is confident of playing. It was a league match against Panama and Messi once again hadn’t started the game. He still was recovering from the back injury but Argentina Coach Gerardo Martino’s next move erupted the stadium – Messi was seen warming up.

The Little Man, did what he is best at in just a span of 19 minutes —hat-trick despite of not being fully fit. And hence once again, Messi had announced himself as one of the greatest footballers on this planet. Going back in time, just  two months ago when Kohli sustained an injury in his left hand while  fielding and was given nine painful stitches on his hand. Kohli chose to conquer the pain in the next match and slammed a record 4th century in a single IPL season.

A minor injury can turn into a serious one, which can eventually end a sportsman’s career forever. But these two have always put their teams ahead and then themselves. Messi and Kohli deserve to win every single trophy they can on both club and international level. Regardless of their major wins with their team, they are easily the ‘epitome’ of their sports.

“That’s it. It’s over for me with the national team. It’s not for me. That’s four finals. The decision has been made, I think so. [Winning] is what I wanted most. It didn’t come. I think that’s it. That’s how I feel now, what I think. It’s a great sadness. It hurts not to be a champion,” a heat-broken Messi said after Argentina’s loss. The next FIFA World Cup is in 2018, all we hope is Messi returns from retirement and win a major title for Argentina. Meanwhile, let’s see if Kohli can ever have an IPL trophy on his cabinet! 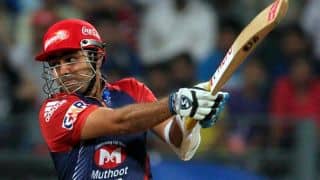