In order to honour the performance of the bowlers in the IPL, the 'Purple Cap' award is being given to the bowlers with the most wickets.

Ever since the inception of the Indian Premier League (IPL), Twenty20 (T20) cricket has risen to a new level. While many claim that the game has mostly become batsman’s paradise, it has not always been the same, and the bowlers have equally performed in the format. Therefore, in order to honour their performance, the ‘Purple Cap’ award is being given to the bowlers with the most wickets. Till date, many bowlers, including spinners, have made grave impact in the tournament, proving to the batsmen that it is not always about them. Therefore, let us have a look at the ‘Purple Cap’ holders till date. Orange Cap holders in IPL till date

The opening season saw someone out of the box walk away with the honour, as Pakistan’s Sohail Tanvir was the star of the season. Playing for Rajasthan Royals (RR), he claimed 22 wickets from just 11 matches along with an average of 12, while his best spell was of 6 for 14. It was due to this very performance of his that RR went on to lift the trophy in the final of the inaugural edition, beating Chennai Super Kings (CSK), under the leadership of Australian legend Shane Warne, who won it with an average side.

The second season saw an Indian claim the honour in the form of RP Singh, who was the first Indian to win the ‘Purple Cap’. He claimed 23 wickets from the 16 matches he played, along with an average of 18, while his best spell read 4 for 22. It was owing to his performance that Deccan Chargers (DC), who finished at the bottom of the table in 2008, went on to become the champions in South Africa, under the leadership of Adam Gilchrist.

The third season again saw a fellow Indian win the cap, as Pragyan Ojha became the star for DC side with the ball. He claimed 21 wickets from 16 matches, along with an average of 20, with a best spell of 3 for 26. However, his side did not repeat the same heroics as they failed to defend the title, as they lost to CSK in the semi-final, while they finished as the fourth placed side after losing to Royal Challengers Bangalore (RCB) in the third-place playoff.

In the fourth season, it was a Sri Lankan in the form of the famous slinger Lasith Malinga, who tormented most of the batsmen. He claimed 28 wickets from the 16 matches he played, at an impressive average of 13, while his best spell read 5 for 13. However, he could not see his team through to their maiden title win, as they lost to RCB in the Qualifer 2 of the playoffs.

The fifth season saw another overseas player dominate with the amount of wickets taken, as South Africa’s Morne Morkel, playing for Delhi Daredevils (DD), made to the record books for the season. Having played 16 matches, he managed to claim 25 wickets at an average of 18, while his best spell read 4 for 20. Although Delhi managed to finish at the top of the table, they were ousted in Qualifer 2 to CSK.

The sixth season was again the year of an overseas player to dominate, as this time it was the West Indian Dwayne Bravo. Playing for CSK, Bravo rattled the batsmen and made the most impact, claiming 32 wickets from just 18 matchesat an average of 16, with 4 for 42 being his best spell . Nevertheless, CSK failed at the very last moment, as they were denied their record third title by MI in the final.

The seventh season saw another fellow CSK bowler and an Indian in the form of Mohit Sharma, who made an impact in the tournament. He claimed 23 wickets from 16 matchesat an average of 20, while his best spell was of 4 for 14. It was owing to the very performance of his thatMohit was considered for the Indian team, as he went on to play in the ICC Cricket World Cup 2015 in Australia and New Zealand, where too he was impactful. As for the season, CSK failed in Qualifer 2, losing to Kings XI Punjab (KXIP).

The eighth season saw the return of the very same CSK guy, as Bravo once again rocked the tournament with this street-smart bowling. He claimed 26 wickets from 17 matches at an average of 16, with his best spell being 3 for 22. Owing to his consistent performance, he remained a crucial and regular member of the West Indian national side. However, CSK once again failed to get their record third title, losing to MI in the final, for the second consecutive time.

The ninth season saw the return of another Indian from a different team nevertheless, as India’s charismatic seam bowler Bhuvneshwar Kumar, who had a great tournament in the previous editions, became the star of the tournament with the ball in IPL 2016. He claimed 23 wickets from 17 matchesat a strike rate of 17.2, with 4 for 29 being his best spell. It was owing to his very performance that Sunrisers Hyderabad (SRH) went on to win their maiden title against RCB.

The just concluded 10th season again saw a repeat of the last season, as once again it was Bhuvneshwar, who made an impact for the same side for the season. Claiming 26 wickets from 14 matchesat an average of 14, his best spell read 5 for 19 against KXIP. However, despite his praiseworthy performance, he failed to lead his team to their second title win, as they were knocked out by Kolkata Knight Riders (KKR) in the Eliminator. 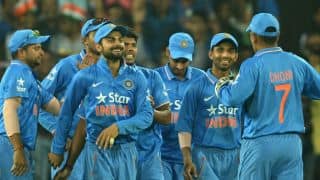