In this first episode of the series about the forgotten art of lob bowling, Arunabha Sengupta talks about the life and career of the man who, according to the John Nyren, author of Cricketers of My Time, was the best bowler ever known .

David Harris (born 1755, died May 19, 1803) was by far the best bowler of the early days of cricket and one of the first true exponents of the art of lob bowling. In this first episode of the series about the forgotten art of lob bowling, Arunabha Sengupta talks about the life and career of the man who, according to the John Nyren, author of Cricketers of My Time, was the best bowler ever known .

For a man who beguiled many a batsman into losing his wicket, David Harris was kind and scrupulously honest, whose goodness showed in his face. Of course, all that is according to John Nyren, who was one of the pioneers in the field of mythologising cricket and cricketers.

Nyren wrote, I never heard even a suspicion breathed against his integrity and I knew him long and intimately. But, there are also other sources which point to the purity and the benevolence of the man, and one is left wondering how so much guile was conjured once he sauntered up to the bowling mark.

Harris was just about 20 when the game saw immense changes. The bowlers, who had thus far trundled the ball along the ground, had discovered the exciting potential of the third dimension. The balls now pitched and lifted, and the batsman s job was more complex than merely keeping his gate like wicket safe with a hockey-stick-like bat. Besides, after incidents of the ball passing through the two stumps without dislodging the bail, the rule was changed and a third stump was added leading to protests that it would shorten the game and also make batsmen too cautious.

Countering the problems of the rising and bouncing ball, John Small created the straight bat in 1775. The balance between the bat and ball now resembled a keen tussle. Richard Nyren had already developed a length ball.

Into this fray walked in Harris, bony, muscular, about five feet nine-and-a-half. It is said that his attitude while preparing his run prior to delivering the ball would have made a beautiful study for a sculptor.

The man and the methods

It took several years of training to produce the effect, though. Richard Nyren saw in him the aptitude to be a champion bowler, and encouraged him to try his new length ball technique. Harris started with a propensity to bowl way too many full tosses. However, with time, he developed the art to new heights changing cricket altogether.

A potter by trade who lived in Crookham, Harris trained all winter. And also at night before dinner, no matter what the season. Many a Hampshire barn was heard to resound with bats and balls as well as threshing when Harris was around.

Thus, he perfected his art and emerged as the champion of Broadhalfpenny Down. Harris started upright as a soldier. With a graceful curve of his right arm he raised the ball to his forehead, drew back his right foot and started his run with his left. This was his standard routine.

At the point of his delivery his arm would twist almost up to his armpit, and the ball would appear as if pushed from his hand. It supposedly had the height and speed of lift that overarm deliveries generate today. At the same time it was so straight and precise on a length that, sometimes, he would wear the pitch bald of grass at one particular point. It was a combination of pace, pitch and lift that was altogether new. No one had seen bowling like this.

The ball seemed to fly off the ground with the lightest of bounces. Besides, he used his right to choose the wicket, a privilege enjoyed in those days, with perfection. He would go to the ground at six in the morning before a match and consider where the pitching of wickets would best suit his bowling. The batsman, if unsuccessful at blocking the deliveries that came at him like cannon-balls, was at the risk of having his fingers battered, his bones crushed and his blood flowing liberally on the pitch. Nyren recalled, Many a times I have seen blood drawn in this way.

Those were the nascent days of score-keeping, but we still have some record of the devastation that Harris wrecked. We don t get the runs he conceded, but the wickets column of the recorded matches bulge and the totals managed by the opposition indicate not too many could have come from his bowling.

According to Ashley Mote in The Glory Days of Cricket There were matches in which the batting side might score 70 or 80, but less than ten would come from David Harris s bowling. Sneakers and half-volleys were no longer on the menu. David Harris was a veritable miser where runs were concerned. He allowed them out of his grasp as he might yield gold bars to total strangers.

Not only did Harris s bowling revolutionise the art of the trundler. It also forced batting to become better. Defensive techniques had to be strengthened to counter the relentless accuracy and brilliance. And that was how Tom Walker perfected his straight batted approach. Both Walker and Harris represented Hambledon. However, once they turned up on opposite sides. Harris bowled 170 balls to Walker, and the batsman survived. There was one solitary single that was scored in all those deliveries.

According to Nyren, Unless a batter were of the very first class, and accustomed to the best style of stopping, he could do little or nothing with Harris.

In fact, some historians credit Harris with changing the game from a backward, slashing affair to a forward and defensive duel.

It was also due to the new bowling style perfected by Harris that the height of the stumps was increased by two inches in 1788. Indeed, many of the modern facets of the game were results of the revolution brought about by Harris.

When Lord Frederick Beauclerk faced him, the great bowler was old, nearing the end of his playing days and suffering from gout. There was a chair kept for him, and he sat down between deliveries. However, even then His Lordship did acknowledge that Harris s bowling was the grandest of its kind he had seen.

One of the distinguishing features of Harris s methods was his attention to detail. He always looked for slightly rising ground to pitch the ball against. With the speed he generated, the rising ball coming at the batsman resulted in plenty of catches. Even as the other bowlers relied on getting their men bowled as the most common form of dismissal, Harris got most caught. He was a master tactician as well.

And as an endearing side note, leaving the 378 wickets in the recorded First-Class matches aside, we must acknowledge that he was a genuine rabbit. He was a left-handed batsman and a confirmed No 11. In the field, when not bowling, he could stop balls by getting his body behind them, but that was the limit to his fielding abilities as well.

Yet, unidimensional that his game was, the dimension was so pronounced and developed that it brought changes to every facet of the game. Some authors do argue that David Harris was indeed the father of modern cricket. 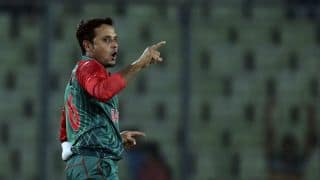