Lokesh Rahul (though prefers to go by the name KL Rahul) is on the verge of scoring 1,000 runs in the Ranji Trophy 2013-14.  He spoke to Nishad Pai Vaidya at the end of Day Two of the final against Maharashtra.

Lokesh Rahul has been sensational for Karnataka this season. By remaining unbeaten on 94 not out at the end of Day Two of the Ranji Trophy 2013-14 final against Maharashtra at Hyderabad, Rahul has put himself within 33 runs of the 1,000-run mark for the season. Opening the batting, he has been very consistent for Karnataka and has often set the platform for the lower order.

CricketCountry caught up with Rahul at the end of Day Two as Karnataka eye bigger things to ensure the trophy goes to Bangalore.

CricketCountry (CC): You are on the brink of scoring 1,000 runs in the Ranji Trophy 2013-14. What different did you do in your preparation this year and how much did that under-23 tournament help you?

Lokesh Rahul (LR): Actually, I didn’t do anything different this year. I think, I have become more mature this season. I had the responsibility in the team. Since I did well last year, my team expected me to do well and give a good start as an opening batsman; carry on and make sure that I setup a good base. Mostly, it is on the mental side that has changed. The under-23 experience was definitely really good and gave me confidence as the conditions were difficult; be it the weather or the wicket. It was really tough on the body and on the mind. Performing there gave me a lot of confidence and I started believing that I could perform in difficult conditions as well and win tournaments for the team. I carried that confidence into the Ranji Trophy.

CC: So would you say that you have become mentally tougher this season. You did well in Singapore and despite being under the weather, you played well on Day Two of the final?

LR: Yes. I have always been mentally tough. Whenever I have set out to do something, I have made sure I do it. But, doing it in the match situation is different and it gives you experience. You enjoy the moment and they stay with you through your life; when you have done well in trying conditions and when nothing is going for you, yet you perform. Those are the things every sportsman wants to do and they live for. Yes, Singapore did make me mentally tough as I started believing that I could fight my body and mind to perform.

CC: As an opener your role is set. Is there any settled blueprint to your knock or you vary your approach?

LR: As I said, my role is to go out there and not come back into the dressing room. My captain and coach believe that I am the kind of player who can be there the entire day. They made me believe that I could play for two days in a row. That is what is in my mind. I don’t really plan my innings or think a lot as I just go out there and take every ball as a challenge. A four or five day game is long and you can’t put a lot of pressure on your mind and over-think about the game to get mentally tired. So, I enjoy my game and batting out there.

CC: How is it opening with Robin Uthappa? He is the kind of a player who can attack and smash any delivery. Watching from the other end, do you get carried away by it at times?

LR: Sometimes I do. I feel I can play shots like that, but he is that kind of player who likes to take on the bowling and attack them. He doesn’t let them settle down and I think it works for me too. When I bat, they are not really settled, so even I get a couple of bad balls. I think we work a good partnership. We are two different players and it helps the team. We understand each other’s game really well and complement each other.

CC: A prevalent feature of your batting on Day Two was your cover driving. Is that a confidence shot for you, something that makes you feel better?

LR: For me, the cover drive isn’t a confidence shot, but coming to Hyderabad, we knew that the wickets are going to keep low as a batsman you have to look to play in front of the wicket and get onto the front foot. We’ve worked hard and any batsman practices his drives first up at practice. It is a very important and scoring shot. It can put the bowlers off. I enjoy the cover drive and initially if you get a few in the middle of the bat to the boundary, you get a different kind of confidence. You feel that your body is moving in the right direction and your balance is right.

CC: In the quarter-final against Uttar Pradesh, you scored a crucial 92 not out to help Karnataka set a target. Was that your best knock of the season?

LR: This season, every innings has been memorable and has been challenging. I don’t think there has been any innings where I have got runs easily.

CC: But, you made it look quite easy on Day Two of the final.

LR: It wasn’t. There were a couple catches that went down which helped. The wicket was a little slow and not the kind of wicket I like to play on. I like wickets where there is good bounce and where the ball comes on to the bat. Yes, it is a big game for us, the final, and we have worked so hard to get here. I have been the in-form player and the team is depending on me to get runs and make sure I take the team through. I had to do it and I am glad I am still playing; hopefully I can get a big knock.

CC: You have been rated highly by Rahul Dravid. How much do you talk to him about your batting and what is his general advice?

LR: As a youngster, it is very easy to complicate things. All he tells me is that cricket is a very simple game and to keep it that way. Work hard on your technique and that is like oxygen. Once your season starts, you shouldn’t be thinking about technique. He tells me to make sure that once it is the off-season, I should work hard and train for hours to ensure to correct the technique. Once you get into your season, there shouldn’t be any flaws in your batting or you shouldn’t feel that you haven’t worked on one thing and it isn’t going right. It can affect your mind and your thought process. He always talks to be about keeping it simple and working hard.

CC: You are a technically correct batsman who bats at the top. During the Indian Premier League (IPL), you batted lower down the order for Royal Challengers Bangalore. How difficult was that for you?

LR: I was just happy that I got an opportunity to play in the IPL. Lower down the order or at the top, for me it didn’t make a huge difference. You are opening for your state and then get to bat lower at another level, it is a game of bat and ball; you are still batting. It was a good experience for me and there was a lot of learning by sharing the dressing room with the greats — talking to them about their game and how they grew up, their training and preparation for the game. It is really good learning and I am glad I got the opportunity.

CC: If you had to pick certain things and say that this is what you have learnt from this season, what would they be?

LR: During the course of the season, I have learnt that cricket and batting is really simple if you keep it simple. It is very important to keep your mind calm and blank when you are batting. You have to enjoy every ball and take it as a challenge to try to win. Those are the positives I have taken from the season. There are a few things I would like to work on for the coming season. I have been getting starts; every game I got 30s and 40s. I have also got three 90s. My stats would have been completely different if I could convert those three 90s and made them into bigger scores. Those are the things I have learnt and hopefully I correct them and comeback a better batsman next season. 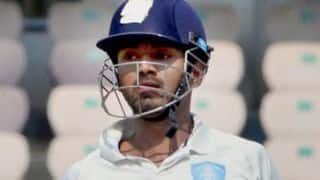