As Scyld Berry asked, Would Ricky Ponting have agreed to the same? The question, unfortunately, will remain unanswered.

July 30, 2009. Australia included Brad Haddin in their team sheet, but unfortunately he picked up an injury after the toss. A generous Andrew Strauss allowed Australia to make a change to their side after the toss, which meant Graham Manou made his Test debut. Abhishek Mukherjee rates the gesture as magnanimous as any in the history of the sport.

They have always fought tooth-and-nails over the urn, the Australians and Englishmen. Conceding an inch on the field was sacrilege. They took field to kill. They breathed fire in battle. They were uninhibited and fearless in combat. And there was no room for trivialities like mercy. ALSO READ: Monty Panesar, James Anderson thwart time to secure draw vs Australia at Cardiff

No, The Ashes are a rather serious business. There was no pity shown. Unless you are Andrew Strauss, that is. What Strauss did in The Edgbaston Test in 2009 remains peerless in the 138-year history of the sport.

Ashes 2009 had started on the backdrop of England s humiliating 0-5 whitewash in 2006-07 Down Under. They were en route to another massive victory in the first Test at Cardiff, but Monty Panesar and James Anderson famously thwarted them, batting out 69 balls for the last stand.

Come Lord s, and England put an end to a 75-year old drought, winning for the first time on the hallowed turf since 1934. Andrew Strauss and Alastair Cook added 196 for the opening stand; England scored 425; and Andrew Flintoff, with some support from other fast bowlers, helped England win by 115 runs to go 1-0 up.

The Australians were all set to go after the hosts at Edgbaston. They had more reasons to cheer when Kevin Pietersen was ruled out of the Test with an injury, and Ian Bell was drafted in as replacement.

Ricky Ponting strode out with Strauss to the middle. Strauss tossed the coin in the air. Jeff Crowe, referee for the match, confirmed that Ponting had won the toss. Batting on the flat track was a no-brainer. The captains exchanged team sheets and walked back to the respective dressing-rooms.

The Australians were warming up while Ponting and Strauss were out in their blazers. The fast bowlers were practising. Haddin took a blow while taking a catch. It turned out to be more serious than it met the eye: his left ring finger was fractured, and there was no way he could play the Test, let alone keep wickets.

The situation was reminiscent of another day in Edgbaston, where Glenn McGrath was ruled out minutes before the Test. On that occasion McGrath had tried to tackle a rugby ball thrown at him by Haddin.

What to do? England already had the team sheet with Haddin s name on it. Steve Bernard, Australian manager, approached the English dressing-room. Andy Flower, Team Director of England, agreed to a replacement, but more importantly, so did Strauss. Crowe did not object either, and Graham Manou was drafted in after the team-sheets were exchanged a first in the history of Test cricket.

When he took field, Manou became only the fifth man to keep wickets since Ian Healy s debut after Healy himself, one-Test wonder Phil Emery (the answer to many a quiz question), Adam Gilchrist, and, of course, Haddin.

Writing for The Telegraph, Scyld Berry lauded Strauss decision, but left the readers with a simple question: What would have happened if Pietersen had been selected to play here, then aggravated his Achilles heel, and pulled out just before the start. Would the Australians have allowed England to bring in Ian Bell after the toss had been made?

Would Ponting have agreed? The question, unfortunately, will remain unanswered.

Shane Watson (62) and Simon Katich (46) added 85 for the opening stand, but once Graeme Swann broke through, the floodgates opened. They were reduced to 203 for 8 before Nathan Hauritz, Peter Siddle, and Ben Hilfenhaus took the score to 263. James Anderson (5 for 80) and Graham Onions (4 for 58) were the wreckers-in-chief.

Australia sniffed a chance when they had England at 159 for 4, but Matt Prior (41), Andrew Flintoff (74), and Stuart Broad (55) took the score well past the tourists. With Swann also joining in the fun, England stretched the lead to 113. Manou repaid Strauss magnanimity by catching him off Hilfenhaus, and also caught Cook and Anderson.

Though Day Three had been rained out, a result was still possible: Australia lost Katich and Ponting on Day Four, and when Watson and Michael Hussey fell on the fifth morning, the lead was a mere 48. But Michael Clarke (103 not out) and Marcus North (96) added 185, and the Test was saved comfortably. Manou remained unbeaten on 13 after a first-innings failure of 8.

– Australia squared the series with an innings victory at Headingley. Clarke and North got the runs while all four seamers contributed with wickets. England regained The Ashes at The Oval, where Broad and Swann sealed the Test with all-round performances. 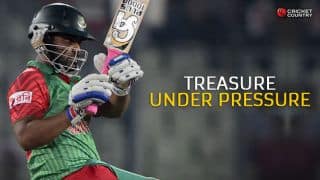