Makhaya Ntini was once again proved wrong by India’s so called India ‘A’ team. They suffered a humiliating loss in the second ODI as well at Harare. He lashed out at BCCI and CSA for sending second-tier teams to Zimbabwe. He got frustrated with the kind of exposure Zimbabwe team is getting. Big teams keep sending their A teams just for the sake touring Zimbabwe. However, as things are panning out, neither South Africa nor Zimbabwe has been wrong in doing the same, as Zimbabwe have not put up a fight in recent past against teams. They failed to qualify in T20 World Cup 2016, getting knocked out in Round 1 by Afghanistan. Ntini needs to revisit his tactics as head coach of the minnow team and focus on proving that their team is capable of facing big guns like Virat Kohli, Rohit Sharma, Ravichandran Ashwin and Ajinkya Rahane. FULL CRICKET SCORECARD: India vs Zimbabwe 2016, 2nd ODI at Harare

Zimbabwe, with 47 points, is currently 11th spot ICC ODI Rankings. They have not been winning consistently. They winning 7 out of 31 matches last year and 3 out of 5 matches this year. They have not lost their status to play Tests, but have not played a single Test since November 2014. It is time to make some grassroot-level changes to improve the quality of cricket in the country instead of bashing boards for not sending their best teams for the tour. They should learn a thing or two from Afghanistan who have emerged as a competitive team of late. Even Oman are improving with passage of time. They won the World Cricket Division League 5 promoting themselves to Division League 4. MS Dhoni wins ODI series after October 2014

Amidst controversies and blame-games Zimbabwe are losing horribly to India’s so called ‘A’-team. They have not been able to put up a fight against the visitors. They have already lost the ODI series to India following today’s humiliating 8-wicket defeat. They were not able to take advantage of home conditions. India had five uncapped players in the squad, of whom three made their debut in the first ODI. The only wicket they got was of Karun Nair. KL Rahul went on to score a century on his debut thrashing Zimbabwe’s bowling attack.

The story took a worse turn today as they got bundled up for 126 under 35 overs. India chased down the total with ease winning the match by 8 wickets. Zimbabwe had earned a reputation as giant-killers during the era of brothers Andy and Grant Flower, Heath Streak, Neil Johnson, Murray Goodwin, and Henry Olonga, and later, Tatenda Taibu and Brendan Taylor.

Unfortunately, all that is history. Zimbabwe need drastic changes in their domestic circuit to produce quality players and make an impact in world cricket; otherwise, they might get left behind with advent of new teams.

Ntini’s main focus should be to get the quality of cricket in Zimbabwe instead of blaming cricketing nations for their lack of support otherwise these customary tours will feature third-tier teams instead of India ‘A’ team. 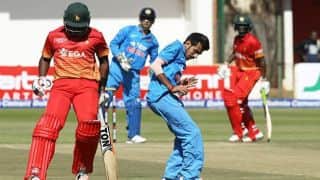 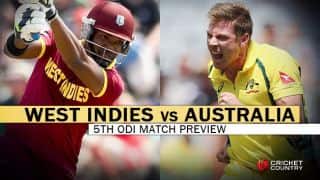