While Indian cricket has groomed several cricketers at an early age, Manish is less than two months away from his 26th birthday.

Manish Pandey has made his One-Day International (ODI) debut today in the dead-rubber match against Zimbabwe at Harare. Pandey has been in the reckoning for the national squad for some time now, but while Indian cricket has groomed several cricketers at an early age, Manish is less than two months away from his 26th birthday. Live Cricket Scorecard: India vs Zimbabwe 2015, 3rd ODI at Harare

Here, then, are five things you need to know about Manish Pandey: Live Cricket Updates: India vs Zimbabwe, 3rd ODI at Harare

1. First Indian to score an IPL hundred: Indian Premier League (IPL) kicked off in 2008, and the first edition witnessed six men slamming hundreds — all of whom were overseas cricketers. AB de Villiers became the seventh (in 2009), and it was only towards the end of the 2009 edition that Manish Pandey slammed a 73-ball 114* for Royal Challengers Bangalore (RCB) against Deccan Chargers (DC). He also became the first RCB batsman to do the same.

2. Loyalty to Karnataka: Born in Nainital, Manish Pandey came to Bangalore with his family at 15. His father was with The Indian Army. When his father was transferred to Rajasthan a few years later, Manish decided to stay back to pursue a career in cricket.

5. IPL final Man of the Match: Wriddhiman Saha slammed 115* in IPL 2014 final to take Kings XI Punjab (KXIP) to 199 for 4. Manish Pandey masterminded the chase with a 50-ball 94, guiding Kolkata Knight Riders (KKR) to a victory with 3 balls to spare. 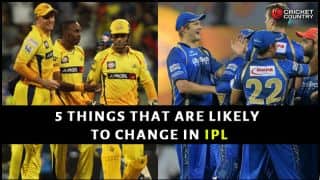 CSK & RR banned from IPL: 5 things that are likely to change in Indian T20 Cricket League