Manish Pandey guiding Kolkata Knight Riders to a 4-wicket win over the Delhi Daredevils in Match 18 of IPL 2017, season 10.

Manish Pandey on Monday proved once again why he is rated so highly in Indian cricket circles, when he played the finisher s role to the tee, thus guiding Kolkata Knight Riders (KKR) to a 4-wicket win over the Delhi Daredevils (DD) in match 18 of Indian Premier League (IPL) season 10. Chasing 169, KKR were in a spot of bother with score reading 21 for 3. However, Pandey and Yusuf Pathan joined forces to set up the win KKR s fourth in five games in IPL 10. Their knocks as well as 110-run partnership was the biggest highlight of the match. Here s a look at it, as well as other highlights of the match:

Sanju Samson s top knock and save: Sanju Samson has had a terrific season so far. He got a hundred against Rising Pune Supergiant (RPS) to set the tone for a good season after failing to justify the immense potential he possesses in previous seasons. On Monday, he once again top scored for DD with 39 off 25 balls, hitting a string of boundaries up front. After this game, he has 173 runs from 4 games at 43.25, coming at SR of 146.61. FULL CRICKET SCORECARD: Delhi Daredevils (DD) vs Kolkata Knight Riders (KKR), IPL 2017, Match 18 at Delhi

Later, with KKR needing 15 runs of 11 balls, Samson produced a brilliant fielding effort. Fielding at the deep mid-wicket boundary, he dived full length, caught a Manish Pandey hit mid-air and then threw it on to the field realising he had crossed the line. Samson saved 4 runs at a crucial juncture, showing tremendous commitment.

Yusuf Pathan s candid confession: During the DD innings, KKR all-rounder Yusuf Pathan was on mic, having a chat with commentators Sunil Gavaskar, Harsha Bhogle and Darren Ganga. When asked whether he relishes the opportunity to bat on small grounds like the Kotla, Yusuf said that ironically, the small grounds make him uncomfortable. I get nervous on small grounds. With long boundaries I know how far to hit,” he said. “My role has changed a bit. Boundaries and sixes are for someone else to hit now. I can play my natural game if needed and look to bat 20 overs if needed,” he said in a candid manner. Yusuf also revealed it was his son s birthday today. FULL CRICKET UPDATES: Delhi Daredevils (DD) vs Kolkata Knight Riders (KKR), IPL 2017, Match 18 at Delhi

Rishabh Pant s blitzkrieg: Young wicketkeeper-batsman Pant s stocks continued to rise in Indian cricket. The 19-year-old, who braved a personal tragedy earlier before coming into this tournament, hammered 16-ball 38; a knock which propelled his side s total to 168. The hallmark of his knock was that it came at a time when other batters were struggling to accelerate on a pitch where run-scoring had became difficult once the ball got old. He hit Umesh Yadav Team India’s pace spearhead for 26 runs in an over. The over saw the Pant hit a seasoned campaigner like Umesh for 3 sixes and 2 fours in space of 6 balls.

Unlucky Nathan Coulter-Nile: Nathan Coulter-Nile, playing his first game this season, bowled exceptionally well to end with figures of 4-0-22-3, against his former team However, he could well have ended up with a fifer, but was unlucky in his final over. He dismissed Pant on the first ball of the 19th over. But after that, he was unlucky on the third, fifth and sixth balls of the over. Chris Morris was dropped twice, first by Umesh and then by Gautam Gambhir. There was more misery for the pacer, as Pat Cummins survived despite the ball hitting the leg stump. The LED-enabled stumps flashed bright red light but the bails did not come off, even as Coulter-Nile saw the proceedings with disappointment all over his face.

Zaheer Khan setting-up Gambhir: The wily old fox that he is, Zaheer showed that age is just a number while class is permanent. He brilliantly set up the KKR skipper Gambhir s dismissal. Zaheer first bowled a couple of in-swingers before bowling one that slightly moved away from Gambhir. He, after seeing Gambhir come down the track, perhaps changed his plan at the eleventh hour and bowled a delivery which shaped away from the batsman. Gambhir played a premeditated shot, hoping for the ball to come into him, and ended up getting a leading edge, which was pouched by Angelo Mathews at backward point.

The Colin de Grandhomme experiment: After opening the innings with Sunil Narine in last two games, KKR once again surprised their opponent with unleashing a new opener in de Grandhomme. However, the experiment failed this time around, with the batsman falling for one.

The Pathan-Pandey stand: After being 21 for 3 chasing 169, KKR needed their middle order to step up. Yusuf and Manish Pandey rose to the occasion, adding 110 runs for the fourth wicket in 12 overs. Their partnership set up the win eventually.

Pandey s knock and last over heroics: While Yusuf fell after 59 off 39, Pandey remained unbeaten on 69 off 49, finishing off the game on penultimate delivery of the match. With 8 needed off 3 balls, Pandey hit the experienced Amit Mishra for a six to bring the equation to 2 off 2. He then finished off the chase with a couple off the final ball. 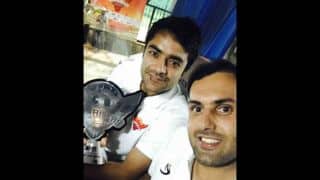 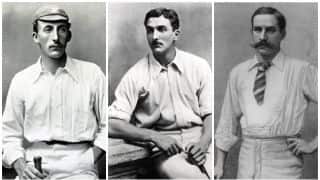