It was on that cold, fateful day at Taunton in 2012 that South Africa’s phase of transition commenced.

It was on that cold, fateful day at Taunton, in the July of 2012, that South Africa’s phase of transition commenced. It was unanticipated. The two-day game between Somerset and South Africa meandered like any other normal warm-up fixture. The bowlers were focused on loosening their bodies, whereas the batsmen hoped for an hour of sharpening their willows, before what was, effectively, the World Championship of Test cricket.

And then doom struck. Mark Boucher — who usually dons glasses, or helmet, or both, when ‘keeping to the spinners — had no gear on when Imran Tahir unfurled a googly to one of Somerset’s tail-enders. What transpired is well-chronicled. The ball went through the batsman’s defences, unsettling the stumps, and in the process giving one of the bails a push into Boucher’s eye, the intensity of which was enough to cause a rupture. Boucher, one of South Africa’s most revered wicketkeeper batsmen, was duly given the news that his career would have to come to a halt immediately, and not after the series against England, as was so meticulously planned.

In his room in the hospital, Boucher was left to absorb the following words by his doctor: “I don’t think you are ever going to see out of the eye again.” The men who waited in the foyer were Jacques Kallis, Graeme Smith and AB de Villiers, the same set who were the first to converge around Boucher when he dropped to the ground immediately after being struck on the eye. They were his closest mates. They packed his kit and personal things upon return to the hotel and coaxed Boucher to put an end to the speculation before it began. The call was inevitable, however. But it needed to be mentioned, and like Boucher eventually said, “When your best mates look you in the eye (literally in my case) and say, ‘you’re never going to play cricket again,’ you tend to take their word for it.”

They were inseparable. When Boucher was set to depart from what he considered was one of the most important tours of his life — and not because it was going to be his last, but since it presented South Africa an opportunity to usurp the No 1 ranking in Test cricket from England — Kallis was adamant on returning home, too, since he did not want his mate to travel and undergo the process of rehabilitation alone. Cricket was not a priority at that moment. Boucher eventually knocked sense into Kallis, and the latter paid tribute with an unbeaten 182. Smith thwacked 131. South Africa won the three-Test series 2-0, and shot to the top of the table. Boucher’s wish was his mates’ command.

One year and a few months later, Kallis realised that even if there was a place beyond the realm of greats, his body was no longer willing to hold up. Smith and de Villiers must have definitely felt otherwise, but the man with whom he shared countless hotel rooms and rides on the plane, one with whom he devised (and was at the receiving end of) several pranks, with whom he shared beers and many a happiness, conundrum or just the ways of the world, was no longer around. Whether that was one of the reasons for calling it quits we will never know, but considering their irreplaceable bond, it can never be discounted. So after featuring in one of the greatest draws against India, Kallis decided to bid adieu. He signed off with a century, but more importantly, a victory. Boucher was beaming with pride.

The most noteworthy photograph to emerge from that match was one in which Kallis was humbly soaking in the adulation while Smith affectionately plants a kiss on his head. Kallis was more than just 13,000 runs, nearly 300 wickets and 200 catches to Smith. He was one of his trusted friends, and not just in the dressing-room. The age difference was invisible. When asked who he though would take over the mantle from Kallis, Smith pointed to his vice-captain, de Villiers.

De Villiers was never a natural leader, but it was Smith who helped get the extra weight off his back and created an environment for his deputy to nonchalantly slip into the role. In due course of time, de Villiers led South Africa to victories over some of the toughest One-Day International (ODI) teams, notably India. He didn’t refrain from crediting Smith for the reversal of tide. The two were now the only remnants of the mini-entourage in the South African squad, and they were duly expected to take the team forward; to their next peak. However, with a young family waiting at home, Smith, only 33, decided it was time to ride into the sunset too.

Again, we will never know how much of an impact the departure of Boucher and Kallis had on Smith, but he often spoke of their absence, although he was quick to add that the team had enough ammunition to fire regardless. One could not ignore his ear-to-ear smile upon finding his two closest mates applauding from the confines of the stands during his last Test though (Kallis’ trip to Cape Town was comical, as was duly revealed by Boucher later on Twitter: “Laughter of the day. Jacques Kallis “How do I get tickets for Newlands to watch cricket?” hahaha… buy some u clown!!!” the tweet read).

With three of his closest friends no longer around to guide him on the field, it’s up to de Villiers, the next heir apparent, to pilot this side to further pinnacles. How much of a toll will it take on him remains to be seen? Can he, like Kallis and Smith, bid goodbye with the team still No 1? The road will be arduous, but will the next Band of Brothers now emerge in South African cricket and make it a memorable one like the previous Terrific Three? 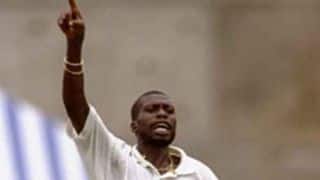