England won the match by 56 runs.

New Zealand’s tour of England came to an end with the one-off Twenty20 International (T20I), which was hosted at Old Trafford in Manchester on Tuesday, with the hosts taking the honours at the end of the day. Amit Banerjee picks the top five moments from the match.

Mitchell Santner strikes twice: Alex Hales and Joe Root had added 51 runs for the second wicket to help England recover from the early dismissal of Jason Roy. Mitchell Santner arrived to bowl his final over of the match, as well as the tour.

Young Santner, who has produced impressive performances in his debut tour so far, struck twice in the same over to remove Hales as well as Jonny Bairstow for scores of 27 and 1 respectively. New Zealand effectively put themselves back on track. CRICKET SCORECARD: England vs New Zealand, only Twenty20, Manchester

Joe Root hammers the Black Caps yet again: The 24 year-old Root had a prolific series against New Zealand in Tests and One-Day Internationals (ODI), crafting two centuries and four half-centuries across formats against the opposition.

Root, therefore, had the responsibility of taking on the opposition bowlers, which he did despite the fall of wickets around him. He was eventually dismissed for 68 off 46 balls, studded with eight boundaries and a six. Root would later be awarded the ‘Man of the Match’. READ: England can beat the best in the world, says Eoin Morgan after T20I victory against New Zealand

Four. Two. Bowled: That is exactly what the New Zealand innings scorecard read in the first three deliveries of their innings. Martin Guptill opened New Zealand’s account with a fine cut that sent the ball racing towards deep point. After collecting a couple of runs off the second delivery, Steven Finn produced a ripper of a delivery that went right through Guptill’s gate and crashed onto the stumps. New Zealand were handed a major blow right at the start of their innings.

Brendon McCullum and Kane Williamson consolidate: The New Zealand captain took it upon himself to get quick runs for his side. He did send the ball all over the park, before getting dismissed most unceremoniously. McCullum was bowled by a Mark Wood yorker that was pitched outside leg, with McCullum playing the ball onto the stumps, after moving to his left.

Kane Williamson continued to plunder the English bowlers and ended the tournament on a high, completing his second T20I half-century. He however, was run-out at a critical time for his side. READ: England thrash New Zealand 56 by runs in the one-off T20 International at Old Trafford

Spectacular collapse: The New Zealand camp still had high hopes of victory at 131 for five, with Kane Williamson batting on 57 . What happened, instead, was one of the biggest collapses in their career as the Black Caps lost their last five wickets for just four runs, with only three batsmen in the New Zealand department scoring in double digits. The ‘New England‘ were hailed as the hero once again by the local crowd. 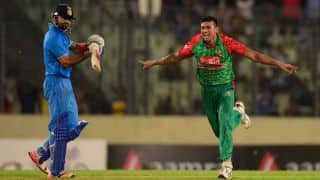