On November 7, 1999, Michael Slater bludgeoned Pakistan by racing to his 13th Test hundred at Brisbane, thereby steering Australia to a 10-wicket win. The bowlers he thwacked featured Wasim Akram, Shoaib Akhtar and Mushtaq Ahmed, all rendering futile against his slashing blade. Karthik Parimal revisits the Test that showcased Slater at the peak of his powers. On November 7, 1999, Michael Slater bludgeoned Pakistan by racing to his 13th Test hundred at Brisbane, thereby steering Australia to a 10-wicket win. The bowlers he thwacked featured Wasim Akram, Shoaib Akhtar and Mushtaq Ahmed, all rendering futile against his slashing blade. Karthik Parimal revisits the Test that showcased Slater at the peak of his powers.

Michael Slater was cut from a different piece of cloth — a fact that became evident early in his career. During the mid-1990s, most opening batsmen adhered to material from the textbook: see off the new ball; apply caution in the first session; or refrain from hitting in the air. But Slater was a free spirit. He dismantled some of the best bowling attacks in the first hour and set the tone for the day ahead. In some cases, the outcome of a series was attributed to Slater’s demolition on the first morning — the Ashes of 1994-95 being the case in point.

Long before Test cricket embraced bludgeoning, eventually etched by the wizardly willows of Adam Gilchrist, Chris Gayle, Virender Sehwag et al, Slater was deemed to be the lone insurgent. He tagged to this reputation before Sanath Jayasuriya and Romesh Kaluwitharana wreaked havoc in the first 15 overs of One-Day Internationals (ODIs). Slater meted out such ruthlessness in the game’s traditional format and, needless to say, put bums on seats with his on-field antics. Such carefree batting obviously led to frequent disappointments, but on the day it all fell in place, there’s no else one would rather be than watch the mastery unfold.

Considering Pakistan’s lean trot with the bat on previous counts Down Under, Steve Waugh won the toss and put them in. The turf, bathing in sunshine, was devoid of any moisture or tinge of green, and Saeed Anwar opened in customary fashion. Hanging back at the crease, he cut Glenn McGrath and drove Damien Fleming with ease on his way to 61. Despite the fall of two quick wickets, the middle-order made merry, scoring nonchalantly at more than three runs per over. Yousuf Youhana [now Mohommad Yousuf], fell short of a century by five runs, and Inzamam-ul-Haq’s 88, propped by Moin Khan’s 61 at No 9, pushed Pakistan’s total to a healthy 367.

It was Fleming, and not McGrath as anticipated, who sporadically caused problems for Pakistan, bagging four wickets for 65 runs. Having watched Fleming swing the cherry both ways, Wasim Akram and Shoaib Akhtar — Pakistan’s new-ball pair — were perhaps enticed by the prospect of bowling at the Australian openers on the second afternoon. Nonetheless, they were up against a batsman who’d thwacked three tons last summer, during the Ashes, and shared two opening century stands with his partner, Greg Blewett, over the course of the last three innings. 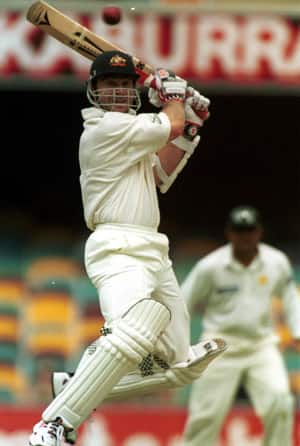 On an overcast afternoon, Slater and Blewett strode out to the crease, while Akhtar, making his first appearance in Australia, marked his run-up, a good distance away from the pitch. As touted, he moved to his highest gear and hurled deliveries that clocked well over 95 mph. Two contrasting speedometers at the ground failed to give an accurate measurement; nevertheless, one hardly needed an equipment to deduce that the ball travelled from his hand to the ‘keepers’ gloves at a blinding speed. Notwithstanding Akhtar’s ferocity, Slater scored runs off the express bowler by edging and gloving through the slip cordon initially. Clearly, it took time for him to come to grips with the pace, but the tentativeness didn’t last long.

While Akram was safely negotiated, Abdul Razzaq’s debut was far from rosy. Often bowling short and wide outside the off-stump, he was cut off the back-foot with disdain by Slater. The intensity with which the ball smashed into the hoardings across the ropes revealed the unforgiving mood he was in on the day. After Razzaq, it was Azhar Mahmood’s turn to be hit to most corners of the ground. The right-arm fast-medium bowler tossed short and wide, too, albeit with a packed off-side field, but Slater picked the gaps with precision — be it between gully and the point or between the second slip and the third, all on purpose.

Pitching the ball up seldom helped. Slater was as proficient as his cuts while driving off the front-foot. He got to his half-century with perhaps the best two shots of his innings. Bowling over the wicket, leg-spinner Mushtaq Ahmed lobbed one up, and Slater, nimble on his feet, danced down the wicket and pummelled it straight over the bowler’s head, almost taking umpire Eddie Nichols’ head off with that smack. In the same over, he hopped down a couple of yards and dispatched another full-length delivery, with the turn, over the long-off fence. After usurping the first milestone, Slater, if that was possible, turned more aggressive.

He and Blewett coasted to their third century-partnership in four innings, as the latter, too, unfurled an array of strokes. But it was hard to move the spotlight away from Slater that day, for he continued to decimate Mushtaq, hammering as many as seven shots off him down the ground. Akram and Mahmood came in for a brief spell, but arrest the flow of runs they couldn’t, although it must be said that Akram was unfortunate to have him dropped at mid-off on 78, off his bowling. Akthar, replenished by now, charged down for a few more overs, this when Slater had been closing in on a hundred. It would be an understatement to say the battle between the two during this phase was dramatic.

After two handsome straight-drives, Slater, on 99, cut a short-pitched delivery straight into the lap of Razzaq, who was fielding at second slip. As was the norm that day, Razzaq grassed the opportunity, casting a bemused expression on Akhtar’s face, but Slater scampered for a single to bring up his 13th Test century. After coming to terms with what just transpired, he took off his helmet, shaking his head with more relief than happiness, and acknowledged the dressing-room and the crowd at The Gabba. It was his day from the outset and he’d fully capitalised on it. He finished the second day with a few more drives, and also a pull and a hook off Akhtar, and at stumps, the Australians were perched at 233 for no loss, Slater unbeaten on 134 while Blewett remained the perfect second-fiddle on 77.

The onslaught continued on the third morning, Mushtaq bearing the brunt of Slater’s force, yet again, as the right-hand bat continued to puncture a weary Pakistan. He reached 150 by guiding the ball towards the third-man fence, but the celebrations were subdued, perhaps because he’d made a habit of amassing big scores in the last one year. But all good things have to come to an end and, after a 269-run partnership (Australia’s third-highest opening stand), Blewett was the first to go, for 89 (seven fours, one six), leg-before wicket to Mushtaq. Three runs later, Slater followed course, holing out to Yousuf Youhana off Mahmood for 169, an innings that featured a stupendous collection of 25 fours and one six.

Man of the Match: Michael Slater

(Karthik Parimal, a Correspondent with CricketCountry, is a cricket aficionado and a worshipper of the game. He idolises Steve Waugh and can give up anything, absolutely anything, just to watch a Kumar Sangakkara cover drive. He can be followed on Twitter @karthik_parimal)