Once famous for his ‘tuk tuk’ batting, Misbah-ul-Haq’s world record 56-ball hundred just shows that T20 cricket hurting Tests is an old question. The tables have turned and it’s the other way round now. Abhijit Banare analyses.

Change is the law of life. It is inevitable. What succeeded today may end up being unpopular tomorrow. Till a few days back ‘experts’ all over the world were busy addressing questions on panel discussions. Questions like: “Will Test cricket survive in T20 era,” “Is T20 spoiling technique of Test cricketers?” and so on.

Come November 2, 2014 and the whole debate has been turned upside down by one man. He may be painful to watch, much like Shivnarine Chanderpaul batting for his life. The runs don’t always come by at a fair clip, but the bowler feels depressed with the resolute forward defence smothering the ball. When he walks out to bat, you know Pakistan is in trouble and all he does is rescue — and rescue painfully.

Misbah-ul-Haq — criticised for batting at a snail’s pace, famously termed ‘tuk tuk,’ smashed a 56-ball hundred. If you were in front of the television screens or at the stadium, you very well imagined Viv Richards chewing his nails back in the Caribbean looking concerned watching his long-standing record go away.

It made for a good record but what about quality of cricket? Where will kids take inspiration from? They used to watch T20 cricket till a few days ago where batsmen look towards the stands smashing the ball in the cow-corner region, and wherever else they can swing. They play all kinds of rash cross-batted strokes; all those ugly shots, and people throng to the stadium clapping, hooting at every hit.

And yet, on November 2, those same spectators cheered a defensive batsman smash the Australians. He smacked the ball hard, pulled with authority, and anything pitched up was lofted with disdain. Where did he learn these shocking shots from? T20? Whatever it is, the signs are clear. If Misbah can, then anyone can do it. All it takes is interest. There is a start for everything. There will be many more ‘fastest’ records in Tests ahead and then maybe you will appreciate this writer’s ability to foresee a lucrative premier league in Tests.

The many spectators at the venue were there to watch a Test match! Let alone Misbah, they even jumped fences and sprinted faster than Usain Bolt to watch Younis Khan bat on Day Two.

Ask any cricket board, money for them is where the public interests lie: in anything that brings high viewership, is lucrative for advertisers, sponsors and broadcasters. Once they start exerting pressure, you know how the momentum shifts.

All will be gone in a flash, Tests can hurt T20, more rash shots will be played in Tests than in T20. Still thinking who will join Misbah in playing like the way he did? David Warner opens for Australia. Virat Kohli is still in India’s Test team. Chris Gayle is very much around. Who’s your favourite T20 player? Glenn Maxwell? He’s batting at No 3 for Australia in Tests.

What about T20 then? Where will the crowds to T20 come from? Time for T20 to reinvent itself to survive. A T10 is a reality, isn’t it?

Post Script for cricket boards: Run, think fast, start your own premier league for Tests or at least T10 before BCCI does it. You know what happened the last time they innovated. 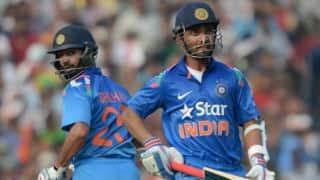