In the end the difference between the other sides and World Champions Australia in ICC Cricket World Cup 2015 was Mitchell Starc. He picked up 22 wickets in eight matches and in an event dominated by batsmen.

In the end the difference between the other sides and World Champions Australia in ICC Cricket World Cup 2015 was Mitchell Starc. He picked up 22 wickets in eight matches and in an event dominated by batsmen; Starc was adjudged the man-of-the-tournament. The left-armer, who got the key wicket of Brendon McCullum, spoke to press after Australia’s fifth World Cup win.

Q: Limited overs cricket is dominated by the batsmen, but today man-of-the-match as well as man-of-the-series are both bowlers. How heartening is this fact?

Mitchell Starc (MS): Yeah, look, it’s nice to see bat dominate ball every now and again. There’s been some fantastic performances with both. Obviously it’s been a couple of big scores, a couple of double tons. look, it’s just been fantastic the whole tournament, and I guess from the Australian point of view, I think we’ve worked really hard at our bowling, not only in the World Cup but leading up to it, and to see it come off, I think every bowler who’s bowled in the tournament, not just the guys who played the final, it’s been fantastic. Mitch Marsh took five for us in the first game and missed out on the back end of the series. To watch Jimmy (Faulkner) take three in the semi, in the final, he bowled fantastic, but I think the whole bowling unit itself was awesome.

Q: Usually in limited-overs bowlers are either strike bowlers or they’re there to sort of lock down the economy rate. How have you managed to do both in this sort of World Cup, and is that something you ever envisaged was possible to do both at the same time?
MS: Yeah, I think it’s been probably a bit of luck involved, but I think we’ve all done it really well. I think we’ve all complemented each other throughout the whole tournament. I’m speaking on behalf of the Australian squad anyway. But yeah, look, it’s been awesome. We’ve got guys who do things differently in the 15, got guys who can swing it, guys who can bowl in the 150 kph. Jimmy (Faulkner) comes in and uses variations better than most people. Look, I think we’ve covered all bases with our bowling attack, and to see it come to fruition tonight, to restrict New Zealand, who have been more or less the benchmark from the start, to 183, was just fantastic.

Q: Mitch, can you talk to us just a bit about how you, I suppose, debriefed on Brendon McCullum after the Auckland game and what you worked on to bowl to him ahead of today?
MS: Yeah, I think we’ve watched him a fair bit through the tournament be pretty destructive. He’s been a key player for them right from the beginning, and he’s been fantastic for the Kiwis to get them off to great starts. I think after that game in New Zealand we knew we had to sort of assess him as he went because he’s very unpredictable. I think personally it was a bit of a planning game with Craig McDermott about just bowling in pace and yorker to him first up, and I’m not sure how that first one missed, but lucky the third one hit. There’s a lot of luck involved, but just nice to see that plan come off.

Q: Mitch, you’ve chosen to wear the black armband throughout. Was there a sense of wanting to do it for Phil Hughes, and did you guys speak about that?
MS: I’ve worn it every day of training and playing since the event. Look, it’s just a personal preference for me and something we wore through the Test series, so I just wanted to carry that on. Look, he’ll never be forgotten and he’s definitely part of this World Cup squad. I think, yeah, it’s just something that I wanted to do.

Q: 183 is not really a huge total, but it can be a tricky one to chase. What was discussed between the innings? What was said by Michael Clarke?
MS: Not much was spoken between us. We were too busy tucking in the dinner. Lovely dinner down there. No, as you said, sometimes it can be tricky, and I think we did a great job with the ball all around, and we definitely had the firepower in the sheds to chase it down. Look, runs on the board are probably always key in a final, especially a World Cup. I think it was very, very fitting to see Michael score 70 odd in his last game. It was great to see. It would have been nice to probably see him at the end, but look, he did a fantastic job along with Steve Smith there.

Q: As two of the younger stars in the team, do you feel well placed to create your own dynasty when some of the older guys give it up, not just you two, but Mitch Marsh, Pat Cummins and others?
MS: I think this squad now has been together for a while, and I think the Tri-Series leading up to the World Cup was probably — probably started before that, but that Tri-Series for us was really about leading to this final, and I think we spoke about throughout the World Cup that we really hadn’t played that perfect game with bat or ball really all around. To see us all play the way we did, we used all 15 guys through the tournament, everyone played their part. Along with the 15 guys, the support staff have been amazing, but yeah, I think every game this summer leading up to the World Cup and then through the World Cup has led to this. That’s something we can take forward now with the senior guys who have definitely got some time left in them. Obviously we lose Michael now, but look, we’ve got a lot of great senior guys around us. The staff have been amazing, and I think the young guys are really thriving on that, and it’s something we can take forward now for the next four years leading into the next World Cup.

Q: Mitch, I know you just want to enjoy tonight now, but how much confidence have you gained from this tournament, and do you have the belief that you can be this dominant in Test cricket, as well?
MS: Yeah, I guess we’re at a bit of a time now between now and the Test series in the West Indies if I get picked. But look, I’ve really enjoyed my white ball cricket, not just this summer but seasons gone past as well. It’s something I guess I feel really comfortable with in my plans and that confidence. But yeah, I think over the last sort of 12 to 18 months I’ve really felt a part of the One Day team, really felt at home. I think that helps a lot, knows that I can play my part in this team really well and we all complement each other well. Yeah, it’s something that — I’d like to push into Test cricket now, but we’ve got a bit of a break now before any of the tests, but still a lot of work to do with white and red ball. Just going to really enjoy this moment.

Q: With this new two-ball rule and the kind of pace that you bowl at, what kind of an advantage is it for a left-arm pacer in these kind of wickets?
MS: Some advantage, but there’s definitely some disadvantage. We only get four fielders out, so it’s definitely a batter’s game. Look, somewhere like Australia and New Zealand where there’s a bit of swing about, I think the two new balls help at the start of the game. The ball is obviously a little bit harder towards the back end, so it might swing towards the batsmen sometimes, their advantage towards the end as opposed to the old rule.

I think it probably swung more in New Zealand than it did anywhere in Australia. I think you take the good with the bad. You’ve got two new balls but you’ve only got four out, so definitely haven’t taken too much away from the batsmen. You still see big scores, you still see scores of 200 individually, a lot of 300 plus scores as a team. Still not too much in favour of the bowler. 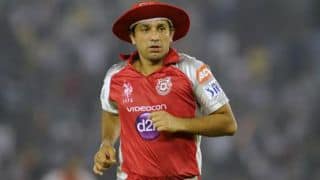 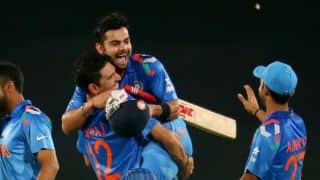