It seemed like it was an improvement process in which Starc toughened up to the extent of being the most devastating bowler in the ICC Cricket World Cup 2015. In the end, he proved to be the difference between the other sides and Australia in the competition.

Not long back, during the Test series against India, Australian legend Shane Warne had dubbed fast-bowler Mitchell Starc “soft”, when the bowler went for 83 from his quota of 17 overs in the first innings in Brisbane. Starc didn’t appreciate the comments and the fact that he was publicly criticised by a former great. He retorted, “He’s getting paid to talk, I’m getting paid to play cricket. Warnie’s been on my back for years, so I’m not too worried about it.”

He didn’t really look effective and was dropped for the next Test. The comments might have played some role in ‘toughening’ him up. He bowled with a lot of fire in the Big Bash League (BBL) and the visuals of the giant left-armer sending stumps scattering in the league made the selectors bring him back for the final Test, when Mitchell Johnson was declared unfit. The bowler repaid the faith and filled up for him, picking up match figures of five for 142. All this happened in January this year, but seems ages ago.

It seemed like it was an improvement process in which Starc toughened up to the extent of being the most devastating bowler in the ICC Cricket World Cup 2015. In the end, he proved to be the difference between the other sides and Australia in the competition. The transformation was however noticed in mid January when the tri-series in Australia got underway and he made the mark at the Melbourne Cricket Ground (MCG) itself, when he brought Australia back in the match with a six-wicket haul against the strong Indian batting. And from there he didn’t look back.

Starc is the new Australian hero and he has achieved something, which the great Glenn McGrath achieved. But not many remember that even in the tri-series prior to the World Cup, he was the man-of-the-series. He picked up 12 wickets at an average of 16.3.

Come World Cup, Starc went on to better it. It’s safe to say that in a tournament that saw 38 hundreds being scored, two of them double, it was a competition that the bat completely dominated. Starc now ends it with the following figures.

ICC Cricket World Cup 2015 was indeed a tournament where bowlers hated the job that they did, but to come out with figures like above is truly remarkable and sends out a strong message that it’s the bowlers role that matters a lot. Even for New Zealand, Trent Boult with the same number of wickets made a huge difference to his side.

None of the Australian batsmen feature among the top five run-getters in the competition. Michael Clarke’s side benefitted from a team effort but what made the difference was the lethal start their bowling got, courtesy Starc.

In Australia’s group match against New Zealand at Auckland, the hosts were chasing 152 for a win but Starc’s six for 28, almost guided Australia to a memorable triumph. Kiwis clinched it by one wicket in the end. Even in Australia’s group match against Sri Lanka, where the latter were chasing 377, all the Australian bowlers were taken to the cleaners and the differentiator was Starc with figures of two for 29. Not to forget the grand finale. Had the Kiwi skipper Brendon McCullum batted for 10 overs, the match would have walked a different path. Starc got the danger man in the first over with a fast yorker and just for a duck. His destructive spell (8-0-20-2) made the difference. In fact, throughout the tournament he bowled on a difficult line and consistently hit over the 90 mph mark. It was fitting that the man who was made the difference was adjudged the man-of-the-tournament.

Post Australia’s fifth World Cup triumph, Warne seems a very happy man. Whether his comments made any difference or not, at the end of the day, both – Starc and Warne got what they wanted, the most prized World Cup. 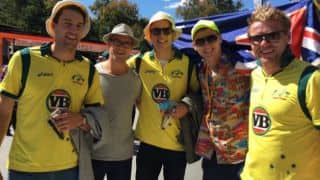 Michael Clarke: I think our bowlers have won us the World Cup