The Pakistan team needs to back Aamer in this testing times for the youngster when he would be coming back to England after the spot-fixing episode.

Pakistan’s tour of England 2016 has been making news ever since Test cricket came back into the fore. After a stretched season of Twenty20 (T20) cricket, spectators are welcoming the longer format wholeheartedly. Pakistan cricket team,coming from a horrible T20 season, has made a lot of changes in their team. They elected Mickey Arthur, a former South African, as head coach and have already announced a 17-man squad for their tour of England. A lot is at stake for this team at the moment that is touring to another nation after a long time and returning to English shores after their infamous tour of in 2010, where some of their players were involved in spot-fixing scandal. Once discarded player, Mohammad Aamer, is included in the team for England and he will already be feeling the heat and will be eager to perform out of his skin to salvage some pride for his nation and himself.  Full Cricket Scorecard: England  vs  Pakistan , 1st Test match, Pakistan tour of England, 2016

It is rightly said that not every person gets a second chance to redeem himself after betraying his own nation. Fortunately for the left-arm pacer, Aamer, has got this chance after he served his 5-year ban for purposely overstepping on two occasions for spot-fixing in 2010. Ironically during the same tour, Aamer swung the ball beautifully and wrecked havoc for the English cricketers. He grabbed 19 scalps in the 4-match series. His 5-52 and 6-84 in the last two Tests showcased his talent on conditions conducive for his kind of bowling.  READ: Pakistan submits Mohammad Aamer’s British visa application before tour of England

Connoisseurs of cricket expressed their concern when he was on the verge of ending his sparkling career for being involved in spot-fixing. He confessed his wrongdoings and as a result came back into the squad quickly after serving his term. Ever since his comeback or second innings, he has proven his zeal to perform for the team. It is pretty much evident that he does not wish to waste any opportunity to shine for his nation and take the mantle of their bowling department which looked directionless before his arrival.

After an ordinary tour of New Zealand in the start of the year, he rose to the occasion in the Asia Cup 2016 with an outstanding spell of swing and seam bowling against India when his side was defending just 80-odd runs in 20-overs. Such was the impact of this spell that India lost half their side chasing a low-score and his effort was applauded by cricket pundits and members of India camp. He was the only shining armour in an otherwise forgettable campaign for the Men in Green in the ICC World t20 in 2016.

No doubt he is in the league of promising bowlers who will rule the roost in times to come. If Pakistan cricket has to rise from the ashes, they need to bank upon this 24-year lad. With Pakistan team touring England and Australia, places where spectators get at the skin of the opponent players, the onus will be on young Aamer. If he performs well, he will be highly regarded in their eyes or else will find the things tough for himself.

The mind games have already started from the opposition camp. England’s Test skipper, Alastair Cook, recently stated that ‘fixers’ should be banned for life. He stated, “ICC should come out and say if you are caught match-fixing you are banned for life and that is what we should do to protect the game.” Though he did express that he was satisfied with Aamer serving his ban, but such a heavy statement before the all-important tour must have been a strategic move to rattle the mindset of the Pakistan pacer.

On the other hand, Mickey Arthur came back at him as he encouraged his team’s main bowler and said, “He served his time, he has done it. I had Aamer in the PSL, he was a fantastic professional. Other stuff is not relevant to me. The stuff that is relevant to me is making Mohammad Aamer the best he can possibly be as a cricketer.” Lots will be said and written before Aamer takes stride in the same place where he committed the crime. Being a youngster, he needs to cope up with all that is being read and said about him. READ: Former PAK players advice Arthur to avoid media statements

He needs to study the conditions and most importantly, have a calm and composed mindset. How he manages the environment and atmosphere at the ‘Mecca of Cricket’, will decide how he holds up in Pakistan’s upcoming tours. Temperament will be put on test for Aamer in a place, where he has been impressive. It is also a challenge for the Pakistan cricket team to back their premier bowler and unite as a team, something which has not been their strength in the recent past. Lets hope to see the Aamer’s deliveries doing all the talking against England batsmen in their own den. After all there is not a better sight than seeing the ball swing and seam and make the batsmen strive for each run. 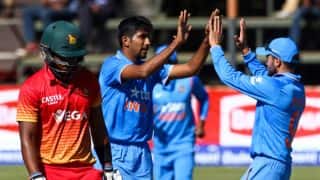