Mohammad Aamer's return to international cricket has been contentious but there is no denying that he has the skill to turn matches on its head.

Mohammad Aamer bowled one of the finest spells by a pace bowler in T20Is in recent memory when he rocked India’s top order, taking 3 for 18 in Pakistan’s five-wicket defeat in Asia Cup T20 2016. It was a spell that rekindled memories of Wahab Riaz’s intense spell to Shane Watson and Australia during ICC Cricket World Cup 2015. Aamer got rid of Rohit Sharma, Ajinkya Rahane, and Suresh Raina within 10 balls, leaving India in tatters at 8 for 3 in their 84-run chase. Full Cricket Scorecard: India vs Pakistan, Asia Cup T20 2016 Match 4 at Dhaka

Aamer got the ball to swing like a hypnotised cobra and took out Rohit and Rahane in his first over with balls that swung back late at good pace. Rohit looked clueless, surviving a close LBW shout in the first ball of the innings before perishing in the second. Rahane, too, was beaten comprehensively and fell LBW to Aamer. Raina looked awkward as long as he was in the middle and eventually played a nothing shot off Aamer to Wahab. READ: Virat Kohli’s genius trumps Mohammad Aamer’s brilliance as India beat Pakistan by 5 wickets in Asia Cup T20 2016

This spell from Aamer immediately brought to mind the hostile spell bowled by Wahab Riaz to Shane Watson and the other Australian batsmen in the quarter-final of the 2015 World Cup at the Adelaide Oval. Pakistan had been bowled out for a mere 213 in that innings, but Wahab bowled a terrific spell to get Pakistan right back into the match. He had David Warner and Michael Clarke out within his first two overs, but the real torment began once Watson came in to bat. READ: India vs Pakistan, Asia Cup T20 2016 Match 4 at Dhaka: Highlights from 1st innings

Earlier, when Wahab was batting, Watson had had a few words with him, and the Pakistan left-arm pacer was rearing to give some back when it was his turn to bowl. He frequently banged the ball in short at 150 kph, going past Watson’s face on numerous occasions. Wahab was so relentless in that spell that Watson was left fending or ducking for a bulk of his innings. READ: India vs Pakistan Asia Cup 2016: Virat Kohli, big-match player

After two overs of facing Wahab’s excruciating bowling Watson finally gave up the ghost and top-edged a pull straight to Rahat Ali. Sadly for Pakistan, Rahat made a mess of it, Watson survived, and Australia went on to win the match and eventually the World Cup. Wahab ended up with figures of 2 for 54 in 9 overs — an undeserving return for what was one of the most superb spells of the World Cup. READ: India vs Pakistan: Top 6 matches in Asia Cup

Much like that spell from Wahab, Aamer’s spell against India too deserved to win Pakistan the match. However, the major difference was that Virat Kohli — who scored 49 off 51 balls — kept him at bay and ensured India managed to go over the line. Aamer’s spell was not quite as hostile as Wahab’s was that day, but it was as skilful. Ironically, it was Wahab’s first over, in which he went for 15 runs, that won India the match and undid all of Aamer’s good work. READ: Australia overcome fiery Wahab Riaz to beat Pakistan by 6 wickets, reach semi-final of ICC Cricket World Cup 2015

Aamer’s return to international cricket has been contentious but there is no denying that he has the skill to turn matches on its head. He seems to have learnt from his mistakes, and has earned himself a national recall. One thing that cannot be argued is that Aamer, the bowler, makes cricket richer. Who would not want to watch Aamer versus Kohli on a seaming wicket in Test cricket? Now it is up to the political landscape to make that happen. 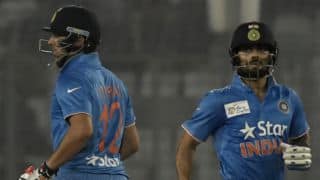