Monte Lynch's dismal debut: a rumour and a run out

Monte Lynch's dismal debut: a rumour and a run out

Of Mike Gatting and lunch.

Monte Lynch made the one of the most unusual debuts of all time on May 19, 1988. Abhishek Mukherjee looks at an amalgamation of a rumour and an incident that made the match a bizarre yet bitter one for the cricketer.

The Demerara-born Monte Lynch had migrated to England, had won his Surrey cap in 1982, went back to play for Guyana, and even went on the rebel tour of 1983-84 to South Africa with the West Indians. He received a ban from West Indian cricket, but continued to play for Surrey.

Whether the following had happened in real can be argued. In A Lot of Hard Yakka Simon Hughes started describing it as rumour has it that ; there are people who dismiss it as an exaggeration; others swear by it. Whatever it was, it cannot be denied that it was too good a story to miss out on.

After a long, convoluted discussion for the upcoming Texaco Trophy against West Indies, the selectors had apparently passed Mike Gatting a note: SHALL WE HAVE LYNCH?

To put things a bit politely, tales regarding Gatting s gastronomic adventures have become a part of Middlesex cricket folklore. Richie Benaud had himself uttered the phrase Gatting at fine leg; now, that s a contradiction in terms while on air; when David Gower had asked Chris Cowdrey whether he wanted Gatting a foot wider at slip, Cowdrey had replied if he gets any wider, he ll burst. Such stories are aplenty.

Rumour has it that Gatting, whether due to the poor handwriting of the person who passed the note or due to what was going on in his mind at that point of time, read LYNCH as LUNCH, and nodded in the affirmative. And Lynch was picked for the first ODI at Edgbaston.

England had an excellent start, reducing West Indies to 72 for four; this included the wicket of Viv Richards, who had fallen to Gladstone Small after hitting three boundaries in his first six balls. Carl Hooper joined Gus Logie, both batsmen reached their respective fifties, and West Indies fought their way back into the match.

The tail did not wag, and after Small took out both Hooper and Logie, West Indies crashed to 217 with the last wicket falling in the last ball of their allotted 55 overs. Small finished with figures of 4 for 31 in 11 overs.

Graham Gooch and Chris Broad then got off to a breezy start before Malcolm Marshall dismissed the latter. Gooch was eventually claimed by a young Curtly Ambrose when Lynch walked out to join Gatting. Lynch negotiated the first ball he faced. He called for a run off the second.

Gatting (can the word predictably be used here?) sent him back, and that was it: Lynch, picked by Gatting, was run out by him after facing two balls on debut. It was as heartbreaking as it could get for a batsman who had waited for the moment for years.

To be fair, despite Allan Lamb s Gatting finished off things in the company of Derek Pringle. West Indies, for some reason, had gone in with two spinners (and Richards); the plan had backfired, and England won easily.

– Thanks to two more convincing victories at Lord s (by 47 runs) and Headingley (by 7 wickets with 30 balls to spare) England clinched the Texaco Trophy 3-0. 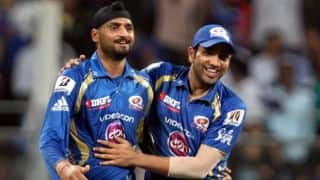 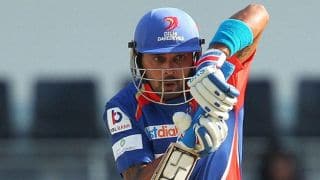