The rest of India refused to be left behind. Madan Lal started the trend. Kapil Dev improved on it to grow an all-time great among Indians. The fashion dominated the 1980s. Barring a few exceptions, the Indians generally accepted the moustache.

In the previous episode we have seen how the moustache went out of fashion after The Great War. The trend continued for several decades. The moustache went out of fashion in both Australia and England. There were some not-too-serious efforts in between. Frank Worrell, Garry Sobers, Subhash Gupte, Gulabrai Ramchand, Nari Contractor, Kripal Singh, and Ajit Wadekar are worth a mention.

Contractor possibly had the best moustache of the era, which tells a thing or two about the combined failure of the period. However, Waqar Hasan s beautifully trimmed pencil moustache cannot be omitted.

It was unfortunate, since this was the era of Salvador Dali, a time when the world of facial hair had a hero to look up to. In fact, the cricketer with a moustache closest to Dali was Jack Saunders, who played his cricket before The Great War.

The tide turned in the end-1960s. Mushtaq Mohammad, clean-shaven in his early days played a crucial role in the revival of the moustache (how did his teammates let the opportunity of calling him Moustache Mohammad pass?). Ian Chappell improved on that with an excellent horseshoe.

By the mid-1970s the horseshoe was everywhere. Suddenly it was the latest craze, especially among Australians. It was almost impossible to find an Australian dressing-room without a single representative of the clan.

And yet, despite the presence of these stupendous moustaches, none matched the sheer splendour of Max Walker. The shape of the face certainly helped, but he still had to hone the beauty.

But Australians were not the only ones. Richard Hadlee and Clive Rice, Nottinghamshire giants with pleasant droops, contributed greatly to the cause, but probably lost out to Clive Lloyd.

Not all Australians believed in the monotony of the horseshoe. Rod Marsh preferred a conventional one. Allan Border did the same, though one may cite limited growth as a reason.

The trend continued in the 1980s. Moustaches spread like wildfire across the world. Ewen Chatfield and Eddie Hemmings were seldom spotted together: had they been, they would certainly have reminded the world of Asterix and Obelix. Some others were not too far behind, either.

In India, the revolution started in the south. Abid Ali, Bhagwat Chandrasekhar (who later developed his moustache into a horseshoe), Srinivas Venkataraghavan, and Gundappa Viswanath were the initial exponents.

The rest of India refused to be left behind. Madan Lal started the trend. Kapil Dev improved on it to grow an all-time great among Indians. The fashion dominated the 1980s. Barring a few exceptions, the Indians generally accepted the moustache. 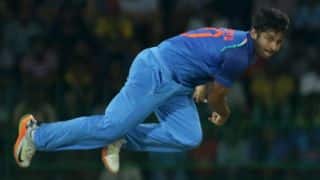