Dhoni ended his innings on 8 from 22 balls, which was a huge factor in his side's loss against KKR

There is no doubt that MS Dhoni is one of the best runners between the wickets at the moment. Despite being 34, his running has never been in question, and he is probably more fitter than ever. He along with Virat Kohli, AB de Villiers and David Warner are termed as the best athletes when it comes to sneak in with sharp singles. His sharp mind in game against Australia during the ICC T20 Cricket World Cup 2016 along with Kohli was a treat to watch, as they ran singles and doubles at will, making mockery of the Australian fielders. Yet, there is no doubt that he was at blame for the run-out of Irfan Pathan during Match 45 for Rising Pune Supergiants (RPS) against Kolkata Knight Riders. FULL CRICKET SCORECARD: Kolkata Knight Riders vs Rising Pune Supergiants, IPL 2016, Match 45 at Kolkata

The incident took place in the penultimate delivery of the 14th over, as Dhoni nudged a ball towards backward point and set off for a single. Pathan, on the other hand, took two steps before realising ball went straight into hands of Piyush Chawla and there was no single available. Dhoni by the time had reached half crease, and yelled ‘RUN’ at his partner in frustration. The hapless Pathan had to sacrifice his wicket in order to save his captain. Yet, such a gracious step from him wasn’t appreciated by Dhoni, who gave him a dirty look in his way back to pavilion.

While many see this as an clear case of misunderstanding, there is no doubt that Dhoni was at fault in this. For starters, there was no single available, as the ball went straight into hands of Chawla. Secondly, Pathan did not give any sort of positive response to his call, yet Dhoni took off without noticing his partner. And finally, the RPS skipper forced Pathan to sacrifice, and even yelled at him in frustration. While cricket has witnessed many incidents where the lower-order batsmen have sacrificed their wicket to save a top-order batsman, this incident displays a lack of sporting spirit. ALSO READ: IPL took down this MS Dhoni-Irfan Pathan video from their website and YouTube channel!

At the time, Dhoni was going horribly at 5 from 14, unable to get going. Pathan on the other hand made a controlled start, scoring 7 from 8 deliveries. Hence, the whole scenario of him being made the scapegoat was shocking, to say the least. Since the run out, Dhoni could only muster 3 runs from further 8 deliveries before innings was disrupted due to rain. Eight runs from 22 is just utterly shocking! What would have happened if Pathan stayed at the crease, no one knows. But one thing was sure that Dhoni could have no justification in his armour for that incident.

Pathan had come into this tournament on the back of an outstanding Syed Mushtaq Ali tournament, scoring 200 runs at an average of 40 as well as finishing as the leading wicket-taker. Despite this, he has just featured twice in 12 games for RPS this season, coupled with the fact he had not a single appearance for Chennai Super Kings (CSK) last season. And both seasons, his skipper was none other than Dhoni.

The handling of Pathan from the Indian skipper has been shocking. A player of such a class should not go through such a scenario. In his first outing of IPL 2016, he was just given one over to bowl. Despite conceding just 7 runs, he did not get to bowl thereafter. And eight matches later, he got his second outing, and that was also prematurely ended thanks to Dhoni’s poor judgement while running.

While it is true Dhoni has numerous international trophies and IPL titles in his cabinet, the manner in which he behaved during the dismissal of Pathan was very, very poor to witness. While Pathan’s selection in the side may not completely be his call, his controversial dismissal was certainly Dhoni’s mistake, for which he should accept the blame. 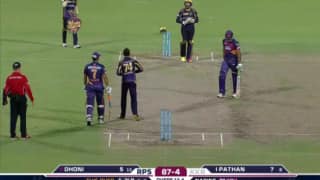