MS Dhoni, what on earth, dude?

MS Dhoni, what on earth, dude?

It had to happen at some point of time. A part of the media and fans expected Dhoni to step down after World Cup 2015.

Were you dreading MS Dhoni s resignation? Were you expecting it? Are you happy? Are you upset? Do you think Dhoni s decision was timely? Do you think it was premature? It does not matter what your emotions or conclusions are: the crux of the matter is that you, whether fan-boy or an out-and-out hater of the man, could not remain unaffected by the resignation. Somewhere, despite being one of the calmest men on the field, despite having earned the moniker Captain Cool (now that I think of it, who had coined the term, and when?), Dhoni has managed to attain an image akin to Sachin Tendulkar, Sourav Ganguly, and Virat Kohli.

It had to happen at some point of time. A part of the media and fans expected Dhoni to step down after World Cup 2015. He did not, though he had dropped the bombshell earlier that season by retiring from Test cricket in the most abrupt of manners. He did not quit despite Arnab Goswami and co. trying their best to rip him apart at questionable decibels on news channels.

They also expected him to resign, or even retire, after India s elimination in World T20 2016. It did not happen, yet again. Dhoni was calm when the question was asked in the press conference by Samuel Ferris: he calmly summoned him to the podium, asked him a couple of questions regarding his own fitness and ability, and that was that. Eyebrows were raised. Some called Dhoni arrogant. Some others, cool. But the matter passed.

Earlier that year Dhoni had become the first Indian (male) captain to win a bilateral series in Australia (he had won an ODI tournament in 2007-08 in Australia as well). He also led India to the inaugural edition of Asia Cup T20.

Later that year he travelled to Florida for about a day (and another day to return) to play about five hours of cricket. Then he travelled to Zimbabwe to lead a group of people whose combined experience was nowhere close to his. And he led India to a series victory over New Zealand.

But then, the unthinkable happened in 2016: India s unprecedented success in Test cricket meant the limited-overs triumphs took a backseat. And Dhoni, given that he was Dhoni, managed to slip into that mysterious abode of his, away from limelight of any sort.

And then, this. This. Why do you do this to us, MSD, Dhoni, Mahi, or whatever they address you these days?

The cruelty of it all

Dhoni can be cruel, and he has earned the right to be one. When he became a father in early 2015, he refused to return home despite the window between the disastrous Carlton Mid Series and the World Cup, where India s much-acclaimed unstoppable juggernaut came to halt with an audible screech in the semi-final.

Dhoni started the press conference with another 20 days, and we can apply for citizenship, followed by a dry smile. There was no sense of pride after the turnaround. There was not a trace of frustration at the elimination. There was only fatigue.

There was a two-second outburst during a conversation with Mark Nicholas, but people have probably forgotten that by now.

Dhoni had been crueller earlier that season. He had missed the first Test due to an injury. He returned for the next two. There was no doubt whatsoever that he would lead in the final Test of the series.

There had been no announcement. The bombshell happened just like that, after the Melbourne Test, away from everyone. He had apparently informed BCCI, then his team, then asked the Board to make the announcement.

And, poof! Dhoni s Test career had became history, just like that, no standing ovation, no guard of honour (a fad that has somehow become immensely popular in this decade), nothing. Dhoni faded into oblivion, and the baton had passed on.

The media-unfriendliest of them all

This was in complete contrast with Sachin Tendulkar s much-anticipated retirement. BCCI had ample time to call West Indies to play a 2-Test series to make sure the great man finished with 200 Tests. The final Test was hosted at Tendulkar s hometown.

Wankhede Stadium was ready in anticipation. Dhoni and his team had choreographed a mobile guard of honour. Tendulkar had a speech ready. To quote from his ghosted autobiography, Tendulkar had even requested Virat Kohli to remind him to thank the pitch.

Sourav Ganguly had announced his retirement before a series. Rahul Dravid and VVS Laxman left away from public focus, but they did not drop bombshells. Anil Kumble at least gave the media and his fans two hours to prepare.

That is the media-friendly way. We in the industry get time to pen down eulogies, to hunt down big guns for quotes, to prepare, to schedule, to yell at people. Not like Dhoni s resignation, where a substantial proportion of the office had to postpone their dinners till goodness-knows-when.

That is how you retire. Give the media ample time to write accolades, interview people (however irrelevant they were), prepare and schedule articles, and give people time to react. Not like this.

It has been 13 seasons since Dhoni had burst into international cricket, almost out of nowhere.

Less than four months later he had been promoted to No. 3, once again out of nowhere, and he slammed an outrageous 148.

In 2007 he was named captain, mostly out of lack of choice, almost out of nowhere. He won the tournament.

So he started paying everyone back by doing things out of nowhere. Had abruptness in decision-making been an Olympic sport, Dhoni would have got India two gold medals.

Just like the Test retirement, nobody expected this resignation. You retire after matches, series. You announce beforehand. You summon press conferences. You draft emotional messages or something.

That is hardly fair, Dhoni. Your entire batting career has been built around a mockery of the MCC coaching manual.

When the open bus carried the World T20-winning cricketers around Mumbai, you were the only poker-faced one.

When India won the World Cup, you shaved your head.

Then you stepped down as the limited-overs captain when nobody expected. More bizarrely, you stood down on the same day that Jharkhand got eliminated from Ranji Trophy. I am trying to find a link but cannot.

I am more or less sure that you are laughing to yourself somewhere, far away from the madding crowd. You had taught us, the Indian cricket media, a lesson for hounding you for years despite those ICC trophies and a No. 1 ranking in Test cricket.

Along with match accreditations and getting paid to watch cricket at work, cricket journalism gives an opportunity to meet people, mostly celebrities. However, the most important purpose of getting to meet these characters is to understand them.

We, the media, had tried our best with Dhoni, and have failed miserably. What were we even thinking? 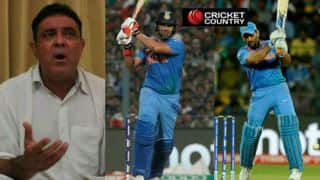