Gujarat had a historic victory as they reached the final of Ranji Trophy for only the second time since their first occasion in 1950-51 season.

Brilliant bowling from pacers RP Singh and Jasprit Bumrah led Gujarat into their second Ranji final in their history of the tournament as they went on to beat Jharkhand in the semi-final of the Ranji Trophy 2016-17. Gujarat’s middle-order held fort after a top-order collapse and posted a challenging target of 235 runs for Jharkhand to win the match. They later excelled with the ball and bundled Jharkhand out for a paltry 111 to complete a 123-run victory and eventually enter the final of the tournament. They will face either of Mumbai or Tamil Nadu, who are competing in the other leg of semi-finals at Rajkot.

Gujarat, on Day Two, were off to a good start but later collapsed by the time the bails were drawn, losing 4 wickets and putting up just 100 runs. They had already lost star batsmen Priyank Panchal, Samit Gohel, skipper Parthiv Patel and were under pressure with just an 82-run lead in hand. Manpreet Juneja and Hardik Patel continued batting on Day Three at the Vidarbha Cricket Association (VCA) Ground, Nagpur. While Hardik departed early, Juneja played a responsible knock. He stood like a rock at one end as Gujarat kept losing wickets in quick succession at the other end. He fought alone; scoring 81 runs with the help of 12 fours and took Gujarat to 217 for 6 before departing.

Another crucial knock came from Chirag Gandhi, who batted at No. 8. He batted with the tail and scored his individual half-century, which pushed the score past 250. Gujarat s innings ended with 252 runs on the board, setting a target of 235 for Jharkhand to win. For Jharkhand, Shahbaz Nadeem was the most effective bowler, bagging a 5-for in the innings. Vikash Singh also bagged two crucial wickets at the right time.

Jharkhand, who had put up a brilliant fight scoring 408 in their first innings, highly disappointed with their batting in the second, losing wickets left, right and centre. The biggest partnership came between Ishan Kishan and Virat Singh, which was for 36 runs. Kaushal Singh (24) was the highest run-getter of the innings.. Jharkhand innings ended with 111 on the board, handing the opposition a 123-run victory.

RP Singh and Jasprit Bumrah were exceptional with the ball. Bumrah bagged 6 wickets, while RP Singh took 3 to end the things on Day Four.

Earlier, Gujarat had won the toss and elected to bat. Priyank Panchal continued his consistent run, scoring 149 while Parthiv Patel s 62 and RP Singh s 40 contributed to take the score to 390. Jharkhand gave them close competition. Despite losing both the openers for 53 runs, the team got to 408 at the end of their innings, gaining a first-innings lead of 18 runs. The batting looked ordinary till Ishank Jaggi and Ishan Kishan came out to bat. Kishan went all guns blazing in his usual hard-hitting style, scoring a 59-ball 61 and changing the game entirely for Jharkhand. The duo played with great understanding as Kishan took risks while Jaggi played with a lot of composure. Jaggi scored 129 while another commendable knock came from Kaushal Singh, who scored 53.

Jharkhand had been dependent upon their middle-order a lot throughout their Ranji Trophy 2016-17 journey. In the second innings, the batsmen failed to handle the pressure of a big match. The top-order collapsed but the usual of the middle-order taking charge did not happen, handing an easy victory to the opponents. However, this will be a memorable season for them as they reached the semi-final of the tournament for the very first time.

Gujarat on the other hand also had a historic victory as they reached the final of Ranji Trophy for only the second time since their first occasion in 1950-51 season. 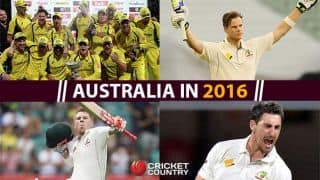 Australia in 2016: A year full of misery