Dhoni was one of the few things that brought fore India's poise in World T20 final.

Applauding the opposition, acknowledging his team’s efforts and apologising to the Bangladeshis for disrupting their routine, Indian captain Mahendra Singh Dhoni has been gracious in defeat, writes Karthik Parimal.

Two months ago, during one of Australia’s hottest summers, Novak Djokovic — the second-best tennis player in the world at the time — was ousted by Stanislas Wawrinka after a gruelling five-set match in the quarter-final of the Australian Open. Neither deserved to lose (the last set had stretched to 9-7), and both players were unduly, albeit understandably, animated during the course of the game. Yet, as lower-ranked Wawrinka progressed and Djokovic was asked to reflect on his undoing (if you can call it that) in the post-match press-conference, he simply said: “This is sport. He played better, showed greater mental strength, [and hence] he deserved to win.”

It was a lesson in humility for all watching.  Djokovic grassed the opportunity to win a fourth successive Australian Open title, yet, his graciousness in defeat won hearts. We now know it’s one of his finest traits.

A similar sense of graciousness engulfed the Indian team after their defeat to Sri Lanka in the final of the ICC World Twenty20 (T20) 2014. They were touted to trounce the island nation, but as envisaged by West Indies’ Darren Sammy, the gods perhaps wanted Kumar Sangakkara and Mahela Jayawardene — two globally revered craftsmen — to win an ICC event, the ICC World T20. And it seemed, from the commencement of the match, as though they had all assembled at Mirpur’s Sher-e-Bangla National Stadium to help the pair etch a famous adieu.

Nonetheless, as Sri Lanka kept the noose tightened for almost 90 per cent of the game, sprinkled in its course were a few moments that brought to fore India’s, and more notably its leader Mahendra Singh Dhoni’s, poise.

A timely pat on the back

A little over three years, after twirling his glistening willow to send the white ball shooting into the magical night sky of Mumbai, little would have Dhoni expected what was to ensue over the course of the following two years. From whitewashes to issues lying beneath the murky waters of the Indian Premier League (IPL), conundrums have pursued Dhoni to no end, his greying beard providing evidence of the fact that they were taking a toll on him. In every pre and post-match conference he attended, questions concerning off-field affairs more often than not popped up, and he mostly answered them — at times up to the point, usually with unparalleled wit.

Top his pressures with Everest-esque, omnitemporal expectations even in the most irrelevant of tournaments and you get a glimpse of what his job entails. Yet, to borrow from Rudyard Kipling’s timeless poem If—, and apply it in this context, he manages to keep his head when all about him are losing theirs. With what’s transpiring in the administration back home, it’s uplifting to watch Dhoni set up a barricade and routinely steer India to the final of an International Cricket Council (ICC) event. How many international captains, despite such demands being a prerequisite for the position, can boast of doing it time and again?

Even with all what’s ensuing around him, it’s important to note Dhoni’s seemingly miniscule gesture during the final, but one that spoke volumes of his aura, just after the conclusion of the first innings. The Indians were overwhelmed when the final five overs produced just 19 runs, this despite hardly losing wickets. Clearly shattered, Virat Kohli, who’d scripted a 58-ball 77, was on his way back perhaps pondering over what was clearly a below-par score, when Dhoni caught up and let the former know that his innings was appreciated with a timely pat. Scurrying thoughts must have understandably occupied Dhoni’s mind, especially since the onus at the time was on him to help his bowlers get India out of the muddle, yet he didn’t fail to acknowledge Kohli’s resilience. India needed a positive Kohli to grace the field in the second half, and it’s what the gesture ensured.

In the 17th over of the Sri Lankan innings, when India had 16 to defend off 21 deliveries, Thisara Perera hoicked one to long-on, and Ajinkya Rahane put in good yards to get to the ball, but let it slip out nevertheless. The drop may not have made any difference to the outcome of the game, considering Sangakkara was in pristine touch by then and was capable of driving his team across the white line regardless, but the Indians were at a juncture where they were looking to clutch at the tiniest of straws. Many a supporter in the stands, and in living rooms across the world no doubt, must have exclaimed in agony, but Dhoni instantly put his hands up to applaud, as if to say: “You’ve done well to get to it. Chin-up and be prepared for the next one that comes your way.” Rahane’s effort was noted. There was no intent of pique from Dhoni.

Eventually, Sangakkara stepped up a gear and propelled the ball to different parts of the outfield. However, there were two further full-stretched dives, again in vain, all duly acknowledged by the skipper, thereby setting the on-field decorum: fight tooth and nail until the last run has been scored.

After collecting his runners-up medal, Dhoni analysed India’s shortcomings and Sri Lanka’s flawless execution of plans with composure bestowed upon few. He described how Lasith Malinga’s action made it harder in the middle overs, rightly blaming no Indian batsman in the process, and how every player tried his best, and that “it was one of those days that things did not go their way.”

But his parting sentence stole the limelight. Bangladesh’s support has been skewed against India throughout this tournament (and also the Asia Cup), but Dhoni’s words must have appeased at least a few. Captains in the past have spoken of how “wonderful the crowd have been” during the course of an event, but seldom has one apologised for disrupting routine in the city. “We have been a nuisance to the Bangladeshi public, they had to stop traffic when the team bus was going, sorry!” he said. Is there another more stoical currently?

“Greatness lives in one who triumphs equally over defeat and victory,” said late American author John Ernst Steinbeck. Could it have been more apt in Dhoni’s case? 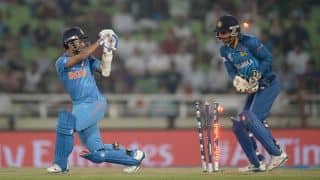