MS Dhoni quashed all the talks of him losing the mojo in T20Is. He blasted an unbeaten 39 off 22 and pouched as many as 4 dismissals.

MS Dhoni quashed all the talks of him losing the mojo in T20Is. He blasted an unbeaten 39 off 22 and pouched as many as 4 dismissals during the first T20I of the three-match series between India and Sri Lanka at Cuttack. After posting 180 for 3, India bundled out Sri Lanka for a mere 87 runs courtesy Yuzvendra Chahal’s four-wicket haul. This was also India’s biggest victory in the format. Here are the top highlights of the day:

Rohit Sharma chases Virat Kohli: In his maiden T20I as captain, Rohit became only the second Indian to score 1,500 runs in T20Is and is only behind Virat Kohli. Rohit, however, could not convert his elegant start into a big innings. Dushmantha Chameera took a brilliant catch diving forward at mid-on to end Rohit’s stay at 17.

KL Rahul makes the most of the opportunity: In the absence of Shikhar Dhawan, KL Rahul helped India lay a strong foundation. With his flexible wrists and strong forearms, he peppered boundaries on both sides. Thisara Perera had to bowl a deceitful slower ball to dismantle his defence and stop his brilliance at 61, his second fifty in the format.

MS Dhoni surpasses Suresh Raina: Dhoni played a paddle-sweep off a pacer. Yes, he has raised his game to that level. He then compiled a lovely cover-drive amidst those Dhoni-esque hoicks. And to add more extravagance to the big picture, he ended the innings with a six. He remained unbeaten on 39. Along with Manish Pandey (32*), he added 68 runs for the fourth wicket.

Yuzvendra Chahal traps Sri Lanka in spin: Rohit introduced Chahal in the fourth over. Tharanga welcomed him with a six over long-on, but that was that. Chahal removed him in the same over.

His next wicket was that of Angelo Mathews who was castled off an absolute snorter in the third ODI. Although the delivery was not as venomous, Chahal managed to make Mathews his bunny nonetheless. Chahal then got the better of Asela Gunaratne and Thisara Perera to finish with 4 for 23, also becoming the highest wicket-taker in 2017 in T20Is. He stretched his tally to 19 wickets, surpassing Rashid Khan and Kesrick Williams who have taken 17 wickets. 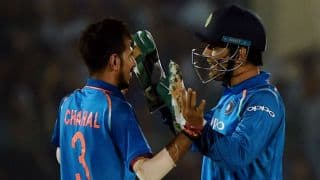 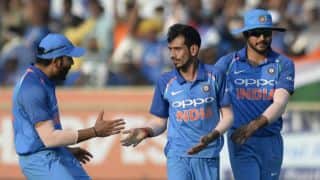