It would be prudent for Mumbai to get rid of the emotional clutter and look past the Sri Lankan pacer.

Mumbai Indian (MI) have a dubious distinction: they have been pulverised for the third consecutive time in the eighth edition of the Indian Premier League (IPL), the latest slump coming against Rajasthan Royals (RR) at the Motera stadium in Ahmedabad. AnkurDhawan digs up reasons for their abject surrender and highlights the maladies that afflict the team.

Life hasn’t been quite as jolly for the Mumbai Indians since the likes of Glenn Maxwell, Mitchell Johnson and Dwayne Smith migrated to different franchises. What prompted the franchise to release three talismanic cricketers simultaneously remains a mystery. Mumbai had recovered dramatically from a string of losses to edge out Rajasthan Royals on net run-rate last season, which may have made them complacent. But it does not require a great deal of brilliance to recognise that this time they are floundering on two critical counts: the waning of Lasith Malinga, who appears to be on his last crutches, and the yo-yo nature of a fickle batting order. Together, the two make a heady recipe for self-destruct. READ: Rajasthan Royals make it three in three with a 7-wicket win over Mumbai Indians

Having frittered away their match-winners, Mumbai Indians found themselves straddled to an ageing warhorse. Malinga was conspicuously off the boil during the ICC Cricket World Cup 2015. He had returned to the Sri Lankan side for the marquee event after going under the knife for an ankle injury. In the shortest format, however, he was expected to rediscover his latent form. Watch Highlights: Rajasthan Royals vs Mumbai Indians

A yard down on pace, Malinga seems to have lost the air of subterfuge that confounded batsmen in his hey-day. Following a torrid ICC Cricket World Cup 2015, Malinga has been an equally spent force in the IPL. The lack of wickets notwithstanding, Malinga has been uncharacteristically expensive with the ball as well. He has conceded eight and a half runs an over in the three matches thus far, almost two runs an over more than his IPL career economy rate. Perhaps it would be prudent for Mumbai to get rid of the emotional clutter and look past the Sri Lankan pacer, who has served them admirably over the last six seasons but is clearly now in his autumn years. Mitchell McClenaghan or Marchant de Lange are worthy replacements, who ought to be tried if they want to entertain thoughts of progressing through to the play-offs this time around. IPL 2015: Points Table and Team Standings

On the batting front, Mumbai have shuffled between a staggering eight opening pairs in their last 18 matches, including the three games this season.  Between the first five opening combinations tried by Mumbai last year, they averaged a paltry 13.2 runs per innings, hardly ingredients for a winning formula. Furthermore, these runs came at a depressing five and half runs per over. Their resurgence and a sneaky entry into the play-offs was engineered by the sixth opening combination of Michael Hussey and Lendl Simmons who had significantly better numbers to which their fortunes were hitched. From the time Hussey and Simmons forged a partnership at the top, Mumbai’s average pranced to 74 runs per innings. It was at this time that Mumbai made a timely surge for a place in the top four last season. IPL 2015: Complete Coverage

However the old ailments have resurfaced to nag them like a malevolent force. Mumbai have themselves to blame for releasing a seasoned campaigner in Michael Hussey who could have added value to an otherwise inexperienced outfit. Besides, you’d think that age is less of a factor when picking batsmen as against the choice of bowlers. Instead Aaron Finch was roped in as replacement, a decision that couldn’t be contested on the face of it but owing to Finch’s indifferent form, Mumbai erred in playing him ahead of a hugely successful Lendl Simmons, who’s only been cooling his heels hitherto. Now, the injury to Finch could be a blessing in disguise as it will compel the Mumbai Indians to summon Simmons to open the batting. However, the malaise runs much deeper as a cloud of ambiguity continues to hover over the potential second opener. Rohit Sharma took up the mantle for two games before realising that his services were sought after in the middle order, or perhaps the likes of Aditya Tare, Parthiv Patel or Unmukt Chand are better suited to opening the innings. Either way they don’t have an answer just yet.  These imponderables have left Mumbai Indians in disarray. 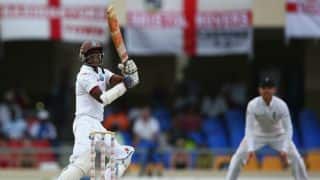