Rajasthan Royals (RR) won their third match in a row as they cruised  to a 7-wicket win against Mumbai Indians (MI)) in the eighth edition of the Indian Premier League (IPL) at the Sardar Patel Stadium, Motera, in Ahmedabad on Tuesday. Steven Smith was the anchor for them as he along with his fellow Australia team-mate James Faulkner sealed the game for them with a vital stand.  Live Blog: Rajasthan Royals vs Mumbai Indians

Mumbai Indians earlier got to the total of 164/5 thanks to a superb stand between Kieron Pollard and Corey Anderson. Mumbai were reeling at 45/3 after 10 overs but both of them came together to add 104 runs for the fourth wicket stand. While Anderson was the first one to attack, Pollard outscored him to score a 34-ball 70. Anderson was dismissed for 50 in the last over but by that time the damage had been done. Rajasthan Royals were brilliant in first half of their bowling innings but fell away in the later half. Live Scorecard: Rajasthan Royals vs Mumbai Indians

Rajasthan Royals were off to a cautious start in their chase. Sanju Samson was the first one to fall as Rajasthan Royals looked to keep wickets in hand as the chase got on. Smith came in at No 3 to anchor the chase. Ajinkya Rahane kept going at a sedate rate though and hit the gaps. They did not get the boundaries but were content to have wickets in their kitty. At the half-way mark, they were 69 for one with Rahane starting to open up. Mumbai did not let them get away though and kept bowling good lines and lengths. Live Streaming: Rajasthan Royals vs Mumbai Indians

Rahane was dropped by Unmukt Chand at mid-wicket coming in from the deep. He was on 38 then but it did not cost them much as Rahane fell to the guile of Shreyas Gopal and found Anderson looking for a big one down the ground on 46. Rajasthan held back James Faulkner and sent in Deepak Hooda ahead of him. Smith like Rahane struggled to get the boundaries as the slowness of the pitch was bothering him but Hooda got going with a couple of sixes to keep the required run rate in check. IPL 2015: Complete Coverage

Spotting danger, Rohit Sharma called back Lasith Malinga and the move worked as Hooda was bowled trying his shuffle and clip shot. With 52 needed in 30 balls, Faulkner was the new man in. Smith got going just in time to score his maiden IPL fifty. He was severe on Malinga hitting him for a three fours in the over to get the gap down. Just 24 runs needed in 18 balls after that over from Malinga. IPL 2015: Points Table and Team Standings

The match winning blow came when Smith hit Suyal over the mid-wicket fence to seal the result for his team; making it 12 needed in 12 balls.  He hit the eight fours in his knock along with one six. He also got the Orange Cap for being the highest scorer in the IPL 2015 so far. He continues to make merry and is leading the team well.The final run did have a bit of a drama; a run-out call which was not in favour of the visiting side. It completely summarised the game as Mumbai Indians had a chance but Rajasthan Royals had made it in time to win the game.

Mumbai Indians have now lost three on the bounce and will want to correct their mistakes to get back to winning ways. All is not lost for them yet. They were completely outplayed by their opponents in all facets of the game.  Rajasthan Royals, on the other hand winning three out of three are sitting pretty at the top of the table and will be looking to continue their winning momentum. IPL 2015: Schedule with venue details 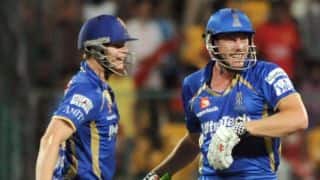 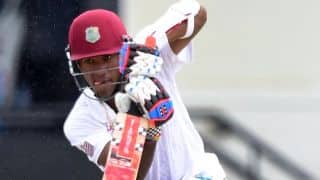