Rising Pune Supergiants have gotten off in their first-ever IPL campaign by thrashing defending champions Mumbai Indians by 9 wickets.

It was not a thriller, but the ninth edition of the Indian Premier League (IPL) is underway. Rising Pune Supergiants (RPS), on their IPL debut, ensured that they beat the defending champions Mumbai Indians (MI) on their home ground. It was an excellent performance by all the players from RPS and they got their combinations right in the very first match itself, which bodes well for them as the tournament progresses. MI, on the other hand, will have to get their team right in their next match and try to get off the mark. Here’s a quick look at RPS’ professional chase. Full Cricket Score: Mumbai Indians (MI) vs Rising Pune Supergiants (RPS), IPL 2016 Match 1 at Mumbai

Ajinkya Rahane’s superb fifty: Rahane opened the innings with Faf du Plessis and was looking in dangerous touch right from the first ball. He looked fearless in his approach and brought up his half-century off just 32 deliveries. Rahane stayed at the crease till the end guided RPS to a comfortable win and got them off to a winning start. Rahane finished the innings off with a six and remained unbeaten on 66 off just 42 deliveries. Full Cricket Update Mumbai Indians (MI) vs Rising Pune Supergiants (RPS), IPL 2016 Match 1

Faf du Plessis’ anchoring role: Du Plessis did not try to match Rahane shot for shot, but he rotated the strike brilliantly and gave Rahane as much strike as possible. But he too managed to hit three huge sixes and was eventually cleaned up by Harbhajan Singh for a 33-ball 34, but he and Rahane had put RPS in command after their opening partnership of 78 in just 58 deliveries. READ: Mumbai Indians vs Rising Pune Supergiants, IPL 2016, Match 1 at Mumbai: Highlights of 1st innings

RPS register first-ever win: This was RPS’ first match in IPL and they managed to win without sweating much. Their bowlers stepped up to the plate and their batsmen were clinical in finishing the match off very well. 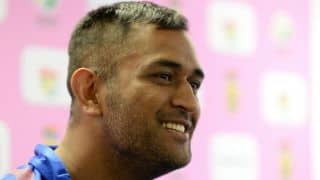