Offspinner Nathan Lyon has become the fourth Australia bowler to claim 350 or more wickets in Test cricket. Lyon needed seven wickets to achieve the milestone, something which three Australians Shane Warne, Glenn McGrath and Dennis Lillee – have managed before him.

The 31-year-old was seven wickets short of the landmark before ongoing the Edgbaston Test against England. He picked 3/112 in England’s first innings and drew an edge off allrounder Ben Stokes in the second dig to pick his fourth and 350th wicket.

The offie then dismissed Moeen Ali to claim his 15th five-wicket haul too. Moeen has now been added to his list of bunnies whom he has dismissed nine times alongside India’s Ajinkya Rahane and Cheteshwar Pujara. He finished with figures of 6/49 as Australia recorded a big 251-run win to take 1-0 lead in the five-match series.

Lyon’s next target is Lillee’s 355 Test wickets, a record he’s just three short of equalling, as he hopes to surpass that and become the third all-time leading wicket-taker from Australia in the format.

Top-10 spinners with most wickets in Tests

Lyon’s rise as Australia’s premier spinner has been a remarkable story. A year before being called up in Australia’s Test squad in 2011, he joined Adelaide Oval groundstaff. He then had a memorable start to his international career, taking a wicket off his very first delivery in Test cricket and that too of Sri Lanka great Kumar Sangakkara. 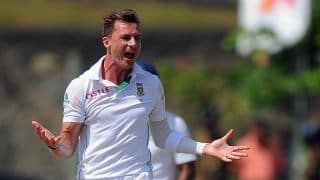