Nepal have the players, unfazed and upbeat fans and most importantly, the undying enthusiasm required in world cricket.

It is a great period for a cricket fan. A lot of action is taking place in almost every part of the globe. There are top teams competing in the most grueling format of the game, i.e. Test cricket whereas, on the contrary, the minnows are also trying to make a mark and earn a name for themselves in between. Ireland is playing Pakistan; Zimbabwe just completed a two-Test series against New Zealand whereas Nepal recently played their eighth game in ICC World Cricket League against Netherlands in Amstelveen. While in the Test format, established teams are sweating it out to earn the numero uno position, the inexperienced teams, or minnows are trying hard to move up the ladder in the game. ALSO READ: Nepal win thriller against Netherlands

Will Nepal be the new Bangladesh?

After pulling off a few inspiring wins against top teams over many years, Bangladesh could not rise high in the ranks and in the eyes of peers due to inconsistencies. They were termed as ‘lions’ for a day whereas they tamed the other day. Bangladesh always have been talented and an enthusiastic bunch of cricketers, but lacked proper and polished all-round skills to keep on rattling big teams. Suddenly, after a few good series at home versus New Zealand and Zimbabwe in 2014, they were in good stead before the ICC Cricket World Cup 2015. The most significant aspect of their good showing in the mega event was that they continued and maintained the momentum going forward.

Bangladesh reached the quarter-finals and after that there has been no looking back for them. Again, the point to note here is that they have carried on from the lessons learned and encouragement gained from the World Cup as they defeated Pakistan, India, South Africa, at home, in One-Day International (ODI) series before finishing second in the Asia Cup 2016. They have turned up into this boisterous unit who is capable of winning, more consistently, when pitted against quality teams. This is pretty much because of experience and playing more. Nonetheless, fans also play an immense role off the field in the resurgence of a team. For reference, see the fans and followers of teams like Australia, England, India, Pakistan, Sri Lanka and Bangladesh. They keep their players on their toes as every performance is judged to the fullest.

Bangladesh owe a lot to their passionate fans for their rise and looks like Nepal cricket team’s fans are on a rampage to increase the standards set by Bangladesh to an unattainable proportion. If Bangladesh are eager to take on the blame of the fall of every top team, Nepal are on a mission to challenge the other minnows and enter the league of the big teams. They can be the next big thing in the 22-yard game and if they enter a bigger pedestal, they can challenge a young ‘star’ team, like Bangladesh, easily. This will still take a lot of time for them but they are all looking eager, as of now.

Crashing out of a big tournament with no performance, losing narrowly or by big margins, disputes arising between players, or between players and management, are few big unrequited stigmas which every team go through to but become a better team once things get normal. What if there is a natural calamity or disaster, of any magnitude, to push the spirits of the ever-loyal and chirpy fans of a cricket playing nation? Nepal had a forgettable afternoon on April 25, 2015 when the country’s normality was put on hold due to earthquake. They were still basking on the glory of their team’s first ever major appearance in the qualification round of ICC World Twenty20 2014, in Bangladesh. Things turned upside down for an inexperienced administration running Nepal cricket, with limited resources. Their team stood up in the test of times to almost qualify for another qualifiers to feature in the main draw of ICC World T20 2016.

Nepal – What they have, and where they lag?

Nepal played in the ICC World T20 Qualifiers to have another shot in reaching the main draw of the ICC WT20 2016 but their playing style proved they were jolted by the earthquake which occurred in the lead up to the tournament. Still, they tried to fight hard. A tough performance would have raised their image to further heights but they were not completely jittered. It means they are still not ready, but not that they do not have the requisite fire in them. Maybe they need to see more blips in order to get up and unite more as a force. ALSO READ: Nepal captain Paras Khadka meets Sachin Tendulkar

They played a match against Marylebone Cricket Club (MCC), which was their debut at Lord’s, and won by 41 runs. This would have bolstered them as every team remembers a win in Lord’s for long.

Nepal have won their third game in the ongoing ICC World Cricket League and are still ranked sixth with two games to go. They have Paras Khadka who is their mainstay in the batting line-up along with Sagar Pun, Gyanendra Malla and few others. In bowling, Khadka leads the way there also with Binod Bhandari and Aarif Sheikh. Their batting looks good as the players are technically sound but lack the art of building the innings if Khadka heads back to the hut. With the ball, they bowl in good lines but need to churn out wicket taking balls more often.

The USP of this team is their shoulders do not drop which is a marvelous aspect to have being this less exposed. Their energy does not die down and their fans have to be credited for this. The more they play, the more promising they look. They, however, lack astute guidance from the management. In addition, like every other inexperienced outfit, they let the match slip from winning positions and this will only get eradicated by playing more. READ: ACC 2006: When Nepal chased Myanmar’s total in 2 balls

Cricket needs Nepal (a country with a population of 26.4 million). Their story has been very different and they need backing. Some more time and support can turn the tides in their favour. They have the players, unfazed and upbeat fans and most importantly, the undying enthusiasm required in world cricket. Khadka has been brave to lead a new team and the question is whether he can confine them as a well-stitched unit like Bangladesh in coming years.

Nepal look like a young and aspirant intern, who wants to make it big in no time and script a permanent status for itself in cricket. 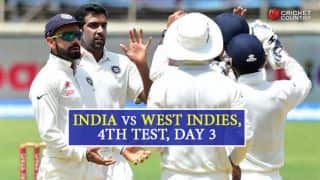