Netherlands’ get a shot in the arm after the disappointment of not qualifying for the 2015 World Cup by attaining T20 International status, writes Nishad Pai Vaidya.

The qualification into the second round of FIFA World Cup 2014 is not the only good news for Dutch sport this month. Netherlands has been awarded T20 International status by the International Cricket Council (ICC) during its recent Board meeting in Melbourne and it comes as a boost following an impressive performance at the ICC World T20 2014. Along with them, Nepal has been rewarded for what has been an encouraging outing in Bangladesh earlier this year. They now join six other Associate nations who enjoy T20I status.

Netherlands’ campaign was largely successful, but it did also show the gulf between the Associate world and the top tier. For once, they were bowled out for a paltry score by Sri Lanka, a game where they couldn’t get going at all. Also, they were on course to victory against South Africa, but inexperience cost them the game. However, they made up for that with a brilliant victory against England. And, to get into the main round, they had to beat Ireland in a mind-boggling game. There were signs of them developing.

Though there may have been a game or two where their inexperience was evident, giving them T20I status is a welcome move. The shorter format has anyway been a pathway to expand the game all over the world, taking it to countries that aren’t well versed with the game. The shorter the game, the better the excitement and the crowds may take onto it. Though Netherlands have been around for a while, and have been regular in One-Day Internationals (ODIs), assuring them T20I status for now will help them chalk out a roadmap.

As we know, Netherlands has not qualified for the ICC World Cup 2015, thus missing the big event for the first time since 2003. It has been a big blow for them, given the fact that they are among the better Associate nations. Their players have played in the County Championship and also compete in the limited-overs championships in England.

On the odd occasion, they get a game against a big side at home. But, losing the spot in the World Cup was something that set them back. The T20I status has somewhat made up for that as they will now chalk out a path to recovery.

Cricket is certainly not a very popular sport in the Netherlands, where football rules the roost. However, there are some steps taken in the right direction and more exposure is what is needed for them. Amol Muzumdar, who worked with the Netherlands as a batting consultant during the 2015 World Cup qualifiers, told CricketCountry in an interview, “It is all about exposure. Netherlands do play the limited overs competition in county cricket. They play home and away games and that is important for the sport. It is important that they keep playing against strong oppositions as you can only improve that way. Every game you play against a good side, you can only learn a lot more.” 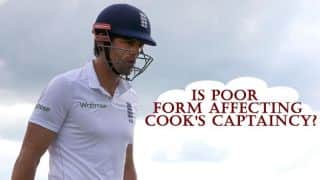