Latham is only behind John Wright in terms of runs and hundreds by a New Zealand opener.

On day three at Christchurch’s Hagley Oval, Latham moved past Turner’s mark of 2828 runs as an opener to move behind John Wright (5260). By lunch, Latham was batting on 118 to take his Test run tally as opener to 2868 in his 40th match. (ALSO READ: Tom Latham hundred takes New Zealand’s lead past 400)

Left-hander Latham whose unbeaten 264 in the drawn first Test is the top score in Test cricket this year – reached his latest milestone with a boundary off Suranga Lakmal late in the morning session. Only Wright has scored more Test hundreds as an opener for New Zealand, with 12. Turner scored seven.

Former New Zealand captain and coach of India Wright scored 5260 runs in 144 Test innings, at an average of 38.11.

Latham’s batting average as Test opener, at lunch on day three, had reached 42.17. This is his first Test hundred in his home city, Christchurch.

The 26-year-old had a tough time against Pakistan in the UAE recently, scoring 13, 0, 22, 50, 4, and 10 in the three Tests, but back in New Zealand he has racked up consecutive hundreds against Sri Lanka. 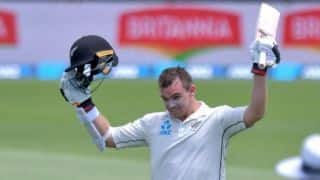