Niall O Brien will forever be remembered for his role in Ireland s World Cup win over Pakistan on St Patrick s Day, 2007.

Niall O Brien will forever be remembered for his role in Ireland s World Cup win over Pakistan on St Patrick s Day, 2007. His 72 ensured that the target of 128 never looked imposing. Eight years later, in the 2015 World Cup, he helped Ireland chase down 305 against West Indies with a belligerent 60-ball unbeaten 79. In a career spanning over a decade, O Brien has scored over 2,000 ODI runs, and has been a mainstay in the Irish middle-order along with brother Kevin. Niall is currently in India for the bilateral ODI series against Afghanistan at the latter s adopted home in Greater NOIDA. In an interview with Abhishek Kumar, O Brien talked about his career, his future, his family, Steve Waugh, sledging, and more. FULL CRICKET SCORECARD: Afghanistan vs Ireland, 1st ODI at Greater NOIDA

CricketCountry (CC): How did you first begin your journey in the sport? What were some challenges that you faced along the way?

Niall O Brien (NO): I first played a cricket match at five. I was watching Railway Union Under-11s play as my older brothers were playing. They were a man short, so I got to play and field.

CC: What made you choose cricket? Does it come naturally to you because of your father?

NO: I wanted to be a pro footballer and still do. I always describe myself as a footballer who plays cricket. However, by the time I turned 16 I decided to focus solely on my cricket, as football was unlikely to give me a career.

CC: You were part of Ireland s initial ODI side in 2006. Tell us something about early days in Ireland team? How was the dressing room environment?

NO: I kept wickets and bowled as a kid, but eventually I chose the former, since keeping wickets meant being involved in the heart of the game. I found fielding really boring, so I wanted to specialise in keeping wickets.

CC: What were Ireland s initial days in international cricket like?

NO: In the early days of my Irish career it was very much an amateur setup. We played lots of low-standard games and didn t get paid apart from meal allowances. But there was always great camaraderie in the dressing-room. I was made to feel welcome from the outset by the team and management.

CC: You once said that Steve Waugh is your ideal hero. Was there a specific reason behind it?

NO: Yep. Steve Waugh was, and still is, my cricketing hero. I grew up watching Test cricket on television, and in the 1990s when the Australians dominated cricket. Waugh epitomised my kind of spirit and grit. I was lucky to be coached by him. I met him many times, and his signed cap and shirt have their places of pride in my house.

CC: It is also said that you were toughened in Australia during Ireland s initial days in international cricket. Tell us more about that.

NO: I played Grade Cricket in Sydney for four seasons to work on my game. It thought me a lot about the game and made me mature ahead of my years as a young player. The Australians are a tough breed but I think they enjoyed my attitude towards the game.

CC: Ireland are in India for a full-fledged limited-over series against Afghanistan. How crucial and big this series is going to be in Ireland s rise in international cricket?

NO: I think all games are important. It is nice to come to India, a country I really enjoying touring; and to play against a talented Afghanistan side is always going to be fun.

CC: Do you think Ireland s rise in international cricket is stuck at a point? The quality of performances has gone down over the last year…

NO: 2016 was certainly a poor year, but there is plenty to look forward to in 2017. We must continue to work hard on all aspects of our game and keep improving.

CC: Ireland are expected to get the Test status by 2019. Do you think that ICC have been late on this?

NO: I think there is a protocol to be followed. As much as we would like to be playing Test cricket now, if it takes a few more months or year to get Test status then that is what we must work towards. We can only control our own performances and destiny and let the administration mate this decision.

CC: Tell us something about your County stint?

NO: I have played as a County professional for 14 years and have loved every bit of it. Touring around England meeting different people playing at different grounds across formats has been absolute pleasure, and making a living from it means I am a lucky boy. I played with a smile on my face and gave my all

NO: I enjoyed playing in the ICL. Playing with some greats in the game was fun. Boyd Rankin and I were to represent our country in the league and learn from the greats.

CC: Would you say you have a fiery temperament of sorts?

NO: Yep. I think it is fair to say I am a bit fiery though much less than I used to be. As I have gotten older and wiser I have chilled out more and getting married to my lovely wife Bex has helped me relax and enjoy life more rather than getting stress about things that are not that important .

I do not mind sledging. I have sledged myself. I do not like to get personal. I rather try to be clever to unsettle a batsman.

CC: How irritating is the underdog tag, which is often given to Ireland?

NO: I do not care for these tags much. I go out to every game expecting to perform well as a individual and as a team and I play to win.

CC: You played two of the best knocks in Ireland s cricket history against Pakistan in the 2007 World Cup and against West Indies in the 2015 World Cup. What was the environment of dressing after both the victories and what was going in your mind during both the knocks?

NO: During the knocks you mentioned, I guess I was fully focused on the job at hand. They were two totally different circumstances: one was a low chase on a green seamer, while the other was a huge chase on a belting track. Both were enjoyable, but I prefer looking back on the game against Pakistan as it set Ireland on its course. It is nice to perform in World Cups, since those are the matches people recall with fondness.

CC: You are 35. How long are you aiming to play for Ireland? Do you want to become a coach in future?

NO: I am 35, but I am still fit and healthy. I am in a good place mentally. 2016 was a tough year for me, but I am still eager to do well for Ireland. I do not know how long I will play form will dictate that but hopefully for two or three years more.

CC: Your thoughts on sledging?

NO: I do not mind sledging. I have sledged myself. I do not like to get personal. I rather try to be clever to unsettle a batsman.

CC: How has life changed after marriage?

NO: Marriage has chilled me out for sure. I miss being away from Bex and the lovely life we have together, but cricket is my job and being away is part of that.

CC: Describe yourself in one word.

CC: What is your idea of a perfect holiday?

NO: All inclusive in a nice resort in Mauritius or The Caribbean. Plenty of sun beers and some sport.

CC: One characteristic that sets you apart from others?

CC: What is your all-time favourite movie?

NO: The Usual Suspects.

CC: What has been your biggest disappointment?

NO: Not behaving as I should have as a young kid. I played up too much causing hassles for my parents.

NO: I have a lot of them… Nobi, Niblet, Irish, Solano…

NO: I reckon I am the best sledged in the Irish team. However, to be fair, we do not sledge a lot. 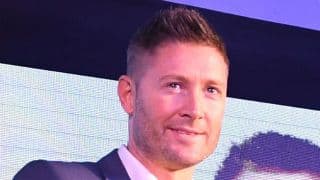 Michael Clarke: Still very emotional for me to talk about Phillip Hughes