O England, once upon a time there was a man called Kevin Pietersen

O England, once upon a time there was a man called Kevin Pietersen

England's recent struggles against Sri Lanka cries out for the much maligned maverick, Kevin Pietersen.

As the Englishmen look up the barrel on the final day, pushed to the brink of defeat by the bowling of Dhammika Prasad, Arunabha Sengupta remembers that once upon a time there was a man called Kevin Pietersen…

Once upon a time, in a land far far away, lived a man called Kevin Pietersen. His blade flashed bright and mighty, slashing opponents to pieces. Yet, the grand vizier of the land, an old doctor named Ali Bacher, told him that he would not find a place in the ranks.

So KP, as our man was called, left his home and set out to make his own fortune. After a long, long voyage he reached a land far, far north that gave him shelter. It was a frail land that needed help, that needed the protection of his shield — because every few years, hordes of ruthless brigands came forth from a great country Down Under and plundered the nation, reducing all there was to Ashes that they carried away.

In the previous one and a half decades, this poor country had met their old foes in 43 battles and lost 28 of them, winning only seven. These battles had been fought within eight great wars, and Pietersen’s new homeland had lost them all. The countrymen quivered at the mere mention of the mighty warriors who fought for the sworn enemy. And our man vowed to protect the land that had accepted him and made him feel at home.

He went to battle, flashing his blade again. When the men from Down Under came to war in the fifth summer of the century, Pietersen stood up against them. No vizier objected to his rightful place this time. Every blow dealt to his fellow men, Pietersen returned in kind. To the boundless joy of all, the raiders were pushed back and the northern land started winning. In the last battle of that summer, Pietersen stood alone in front of the rampant horde that flung devious missiles, but he held fort, indomitable and victorious, making sure that the vigorous troops were beaten back. For the first time in 19 years did the land manage to triumph over their greatest foe. Pietersen became a hero. All those who fought that greatest of wars were honoured with the Most Excellent Order of the Empire. No one deserved it more than our man.

For the next eight years he fought for his adopted country. People came to see him from far and wide. His valiant blade struck down many a foe, in every land. He fought 104 battles in all, 30 of them against the hordes Down Under. Not always did his land win, but the foes who had regularly terrified the nation were at last met as equals. During his time five great wars were fought in deadly flames that always ended in Ashes. And the northern land tasted victory in three of them.

Yet,strangely, he was shunned again. For reasons largely uncertain and never fully disclosed to the shocked citizens of the land, Pietersen was shamed. He was asked to leave, never to return. Whispers were heard that powerful men disliked him, were at odds with his arrogance and his attitude. The glories were forgotten, the great victories erased from important minds. Pietersen was banished.

Our gallant hero was forced to become a mercenary, a ronin, travelling far away again, this time to a huge land in the east. There he led men in coloured costumes in noisy, miniature jousts that were the popular tamasha of the land.

And what of the land that he had shielded all these years?

There came along a band of men from a tiny pearl drop of an island, a neglected place that the northern country had so long treated with utmost disdain.

It was said the onrushing soldiers from that distant island nation had a few excellent blades in their midst, but no projectile weapon to knock over the defenders of the homeland.Little did one know that the defence had been rotting for a while. Down they went like a pack of cards, falling in front of unheralded adversaries. Defeat stared them in the face without that shield of substance to spread over them as it had done for the last eight years.

And in his home far, far away from the battlefield sat Pietersen, the blade that might have saved the nation sheathed and unused. India, Pakistan cash in on FIFA World Cup 2014 fever by indulging in game of football 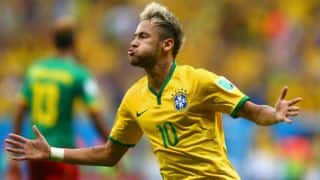