The England-Pakistan series was nothing but a battle full of mixed emotions. Whether to support the hosts or the visitors, every Test cricket fanatic was left helpless.

The England-Pakistan series was nothing but a battle replete with mixed emotions. Whether to support the hosts or the visitors, every Test cricket fanatic was left clueless. As a matter of fact, the result would not have mattered, for we knew we will witness some top-drawer Test cricket on the English soil. And the series turned out to be exactly the same way, ending with both teams at the same scoreline. However, after winning two consecutive Tests, England were expected to muscle the visitors out of the final Test. But Pakistan‘s resurgence at The Oval’s flat track ensured they end the series the way they kicked it off. Let us assess the English cricketers on the basis of their performance: Full Cricket Scorecard, England vs Pakistan , 4th Test match

Chris Woakes, 9/10: He did nothing wrong this summer. You give him any task and he excels in any given condition or situation. Fluent with the bat and immaculate with the ball, Woakes was at the pinnacle of his form in the series.

If you go by the numbers, these words and articulation will not justify his superior performance. In four matches, he picked up 26 wickets at 16.73, including two five-fors (second best Englishman being Stuart Broad with 13 wickets). With the blade, he scored 177 runs at 35.40, which is even more impressive for a lower middle-order batsman.

Joe Root, 8.5: Struggling to score runs in the two-Test series against Sri Lanka earlier, the pressure was on the 25-year-old vice-captain to deliver goods at No. 3. Against a quality Pakistan bowling, the task only got tougher. Nonetheless, he has a reputation of scoring Daddy hundreds on his home soil. After being bogged down in the series opener, England dished out a batsman-friendly track.

The stage was all set for Root. With the pitch being in batsman’s favour, Pakistan bowlers could not pose threat against his flair and style, going on to score his second Test double-hundred and helping England level the series 1-1, midway through the series. All in all, he was the highest run-scorer for England, amassing 512 runs at 73.14. Also read: Pakistan’s marks out of 10

Moeen Ali, 8: Every time the captain handed him the ball, he made sure he makes full use of it. Wickets of the likes of Younis Khan, Misbah-ul-Haq and others evidence the fact that his finger-spin generates more venom than the batsmen expect.

To put things into perspective, he does whatever the team needs him to. Although he plays the all-rounder’s role, Moeen’s interest is majorly focussed on batting. Moreover, he bats lower down the order despite being a top-order batsman for his domestic team.

His 63 and an unbeaten 86 in the third Test gave his team a much needed 2-1 lead. However, his hundred in the final Test proved why he is England’s unsung hero and deserves an eight-pointer.

Alastair Cook, 7.5: This series he became England’s highest run-scorer in Test cricket, surpassing Kevin Pietersen. A hundred and three half-centuries, he scored runs at an average of 60.42 and strike-rate of 67.68, which is outrageously higher for a conventional batsman like him. All the same, it was just an encore of his previous stunning performances, and therefore, deserves 7.5.

Jonny Bairstow, 7.0: Brilliant behind the wickets and even more swashbuckling with the bat, Bairstow’s contribution was significant, especially performing at crucial junctures. He churned out 366 runs at 52.8 and pouched 14 stunning catches with the gloves.

Stuart Broad, 6: For a bowler of his calibre, his performance was mediocre. Known for running through sides, his best bowling figures read 3 for 38. However, he looked toothless when the track offered very little, failing to produce the lateral movement. He scalped 13 wickets at 28.61. Also read: Is this the beginning of Pakistan’s resurgence?

James Anderson, 6: Failing to recover from his injury, he was drafted out the starting XI in the first Test. However, his three-for in the second innings of the second Test set the tone for England, winning it by a huge margin of 330 runs. Like Broad, he could not display his magic with the ball, not managing to take a five-for at least once.

Steven Finn, 4: Only 5 wickets in three matches, in England conditions, at an average of 70.40 puts Finn way down in the list. There were times when he bothered the batsmen with his away-swingers, but consistency was something he failed to display.

Gary Ballance, 3.5: Had he not scored 70 in the third Test, he would have been graded much lower. Scoring 195 runs at 27.85, playing him as a middle-order batsman has not solved England’s middle-order conundrum yet.

James Vince, 3: Replacing Nick Compton, all Vince had to do was get some runs in the middle order, something even Ballance failed to achieve. With a highest score of 42 in eight innings, England’s middle order looked more fragile, putting them on the back foot.

Alex Hales, 1: His scores read 83, 86, 11, 18 and 94 against Sri Lanka this summer. It seemed England’s hunt for Cook’s partner came to an end. But, when he faced the might of Pakistan bowling unit, his weakness against spin and pace were exploited. With 145 runs at 18.12, England might have to restart the ‘opener’ hunt. Also read: The day Pakistan became Misbah-ul-Haq

Jake Ball and Ben Stokes, 1: It would be unfair to even rate a player who played only one match. While Ball was injured right after the series opener, Stokes was injured in the next one. However, both did exhibit good performances whenever they took the centre stage.

All in all, had England played well as an integrated unit, the result may have gone their way. 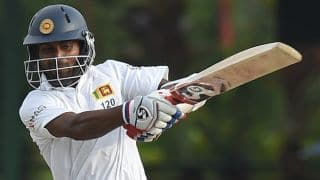