Having been lambasted by critics for their poor display in Asia Cup, Pakistan will look to make a positive start against an in-form Bangladesh in Match 14 of T20 World Cup 2016

Pakistan will take on Bangladesh in their opening fixture of Group 2, Match 14 of T20 World Cup 2016 at Eden Garden, Kolkata. Bangladesh are coming on the back of 3 consecutive wins in the qualifiers, through which they have reached the Super 10. They are very high on confidence as well, considering they reached the finals of Asia Cup 2016 prior to this tournament. On the hindsight, Pakistan produced a very limp display in the earlier concluded Asia Cup, in which their positives were overshadowed by their vulnerabilities. Yet, they will carry forward the 15 runs win over Sri Lanka in the warm-up game as a confidence booster going into World T20. Full Scorecard: Pakistan vs Bangladesh,14th T20 Match, Super 10 Group 2, ICC T20 World Cup 2016

This fixture provides them a perfect chance of avenging their Asia Cup defeat, as well as going into their next game against India on the back of a win. The critics lambasted the squad for their poor showing in the Asia Cup, and Afridi’s side will hope to silence the critics. The Asia Cup defeat against Bangladesh was resulted due to a batting failure. A mere total of 129 in 20 overs meant Bangladesh strolled through to victory with 5 wickets remaining. The Pakistan side will be disappointed and angry at their own recent displays, hence, they will feel they have a lot to prove in this tournament.

Post Asia Cup, Bangladesh have only improved, winning all their games with convincing performances. Tamim Iqbal has taken his game to a different level with scores of 83*, 47, 103*.Soumya Sarkar and Shabeer Rahman have been in great nick as well. If Pakistan are to avenge their defeat, they must make sure Bangladesh top order is contained. They must also look to utilize the absence of Mustafizur Rahman in Bangladeshi bowling attack. Afridi’s side though, have issues of their own. READ: Pakistan vs Bangladesh, T20 World Cup 2016, Match 14 at Eden Gardens: Mohammad Aamer vs Tamim Iqbal and other Key Battles

Their top order batting was a huge let down in Asia Cup. Both Mohammad Hafeez – 31 runs in 4 innings and Sharjeel Khan – 52 runs in 4 innings, struggled to get runs, but have been shown faith and retained. Both the players must justify the selector’s call by getting Pakistan off to a good start against a bowling attack led by Al Amin Hossain and Taskin Ahmed. Also, Ahmed Shehzad has replaced misfiring Khurram Manzoor, who scored a mere 11 runs in 3 innings and Pakistan would hope Shehzad will fire on all cylinders. In their middle order, Umar Akmal, Shoaib Malik and Sarfaraz Ahmed have all shown positives with their batting, and all hopes will be pinned on these three to bat wisely in middle overs and negate the spinning threat of Shakib Al Hassan. The biggest worry for Pakistan though, will be the form of their skipper, Shahid Afridi, who has been in very poor nick with bat since past one year.

In the bowling department, Mohammad Aamer has been very impressive since his return to international fold. His performance against India in Asia Cup was a highlight for Pakistan. His temperament, though will be tested against an in-form Tamim on pitches, which won’t have much assistance for pacers. Mohammad Irfan will be key to supporting Aamer in building pressure and getting early wickets. But the problem for Afridi will be in choosing his third and fourth bowler. Anwar Ali, Wahab Riaz and Mohammad Nawaz struggled to impose themselves on the green pitches which assisted the fast bowlers. With Indian conditions expected to assist spinners, Pakistan will heavily rely on Afridi, Malik and Hafeez to chip in with their spin and maximise the conditions 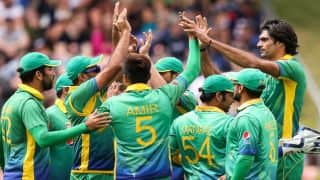