Pakistan fought hard to emerge victorious despite having a small total of 132 on the board. So let’s take a look at some of the highlights that grabbed the attention in this riveting encounter from Port of Spain.

Shadab Khan-inspired Pakistan continued their winning run against West Indies in the second Twenty20 International (T20I) by coming out victorious in a low-scoring thriller by 3 runs. The game went down to the wire, but pacer Hasan Ali showed excellent nerves in the last over to guarantee Pakistan an unassailable victory and 2-0 lead in the four-match series. West Indies, even though ended up as the losing side, showed excellent character till the end to give a tough fight. But the young guns from Pakistan fought hard to emerged victorious despite having a small total of 132 on the board. So let’s take a look at some of the highlights that grabbed the attention in this riveting encounter from Port of Spain. Live cricket score: Pakistan vs West Indies, 2nd T20I

No show from Kamran Akmal: Kamran Akmal had an impressive stint in Pakistan Super League (PSL) 2017 riding on which he was called up for the West Indies tour. He played a handy knock of 22 in the series opener at Barbados. But in the second game, he was dismissed for a five-ball duck. He was cleaned up Samuel Badree as the right-handed batsman remained rooted to the crease and kept waiting for the ball to turn. The ball clipped away his off-stump along the way.

Sunil Narine’s guile: Badree had dominated the initial stage of the first innings with his wicket-to-wicket bowling. Pakistan batsmen found it hard to get going against him. But amidst Badree’s stringent spell, Narine factor stormed away the visitors. Narine bowled a lot straighter in this match. His deliveries drifted after pitching and a majority of the times batsmen waited for it to turn. Narine played a big part in dismantling the strong Pakistan middle-order by getting the wickets of Ahmed Shehzad, Sarfraz Ahmed and Sohail Tanvir.

Carlos Brathwaite the skipper – Brathwaite led his side from the front. He changed his bowlers regularly, he himself bowled some great deliveries showing excellent variations and picking up 3-for himself. But more importantly, he was the live-wire in somewhat lousy West Indies fielding display. Evin Lewis, Jason Holder, Rovman Powell fumbled big time at crucial junctures giving away cheap runs. But leading from the front, he took an exceptionally well-judged catch of Imad Wasim diving full length to his right maintaining his balance to not spill the effort.

Evin Lewis and the art of run-out: Early in the innings Lewis looked to built momentum along with partner Chadwick Walton. He nudged for a quick single by punching the ball to mid-on. Evin ran hard, but Shadab who ran in to cover the stumps came in between Lewis’ run. There could have been a collision, but rather the batsman tried to go around Shadab and while doing so, lost his bat. And just then the bells were dislodged as Imad Wasim fired a direct hit. Pakistan players went up and so did the umpire. The reply showed Lewis’ foot airborne as the bails were dislodged.

Nasty as it gets: West Indies were looking to build their innings and while doing so had lost Lewis. Nine balls later, one more collision took place. Walton rammed into Sohail Tanvir. Same over’s last ball, things became even more nasty. Marlon Samuels tapped the ball in front of point. A quick single was there for the taking; Walton ran at the striker’s end, but Shehzad ran too – collected the ball and turned back to throw the ball onto the stumps. But he is was in the middle of Walton’s run. This time Walton could not avoid the collision and he crashed into Shehzad who was almost in a sitting position. His knee rammed Shehzad’s neck. Walton flipped into the crease but got up soon; whereas Shehzad remained unmoved after falling on the ground.

In came support staff and Pakistan physio. Shehzad appeared in a lot of pain, had his neck braced-up and was stretchered off the field in an ambulance. He did come back in the game later on appearing perfectly fit and fine. But the collision was a nasty one.

Marlon Samuels’ that form: Samuels looked imperious with his power hitting. He hardly showed mercy to the Pakistan bowling attack, hammering the ball irrespective of the line and length. He displayed complete aggressive mode against both spinners and pacers. To top it all, he cut one past backward point off Shadab’s bowling, which was also the first boundary off Shadab in International Cricket. After hitting the boundary, Samuel mouthed some words to the 18-year old pointing out the ball as it crossed the boundary rope like a Ravi Shastri – Tracer Bullet.

Shadab Khan, yet again: Shadab nodded when Samuels mouthed him some advice. He knew Samuels’ strong points, but more importantly, he knew what he had under his sleeves and it was a matter of time before he unleashed it all over the West Indies team. Shadab conceded 6 runs in his first over. The first ball of his second over and he had broken through Walton. If this wasn’t enough, he got consecutive wickets of Kieron Pollard and junior-Andre Russell, Rovman Powell. 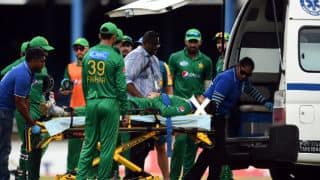