Shannon Gabriel turned the game over its head in 11 overs dismissing five Pakistan batsmen to seal an emphatic victory in the second Test at Barbados.

Shannon Gabriel turned the game over its head in 11 overs dismissing five Pakistan batsmen to seal an emphatic victory in the second Test at Bridgetown, Barbados. Having set a target of 188 on the ultimate day of the second Test, Gabriel led from the front as West Indies dismantled the entire Pakistan innings for 81 runs. West Indies have now levelled the series 1-1. The last Test will be played at Dominica from May 10. Apart from Gabriel s 5-for there were some other performances from both sides that kept the game interesting throughout the five days. Let us sail into the timeline and fish out some interesting highlights:

Roston Chase s 131: When in crisis, Roston Chase is the man for West Indies. In a short career, the Bajan has proved himself with fine knocks down the order. In the first innings, Chase once again saw the top-order failing to sustain against the troika of Mohammad Aamer, Mohammad Abbas and Yasir Shah. The hosts were reeling at 102 for 4. But Chase playing at his home ground utilised the conditions to the best of his ability. Full Cricket Scorecard, Pakistan vs West Indies, 2nd Test at Barbados

He first defied Pakistan bowlers by presenting an absolute dead bat. But slowly as he eased in the game he accelerated the innings. There were free flowing drives, late cuts, over the top shots against a potent Pakistan attack but he refused to get deterred and played a masterstroke innings to put West Indies beyond the 300- run mark in the first innings.

Azhar Ali s 104: Azhar was going through a lean patch. He had scored a valiant double century against Australia at Melbourne, but since then his form had taken a drastic dip. But at Barbados, Azhar seized the opportunity making a comeback. But this comeback wasn t up to the standards that he has set. He took a lot of time to get to the milestone. He was facing a strong West Indies bowling attack, but given the time he took to construct his innings just took away the pace of the Pakistan innings. Full Cricket Updates, Pakistan vs West Indies 2017, 2nd Test at Barbados

There came one point where he accelerated his batting, but was soon dismissed. But nevertheless, it was his ton that gave Pakistan the necessary base if not momentum to fight the West Indies in first innings.

Misbah and the case of 99: Prior to this Test, Misbah was left stranded on 99 in the first innings at Jamaica. And earlier he was dismissed on 99 against New Zealand in 2011. But at Barbados, when he came out to bat in the first innings, he resorted to his infamous Tuk Tuk-style. Once he resumed batting on the next day, he scored briskly. There was everything right about his knock and with the amount of time Pakistan openers had taken to get going, Misbah provided the needed momentum to get past West Indies. PAK vs WI, 2nd Test, Day 5: Gabriel s 5-for seals emphatic 106-run victory for WI

He quickly went into his 90s and there was definitely a 100 for the taking. Also the situation was different here as he had a good partner at the other end and not one of his tail ender. But fate had something else for Misbah as this time he got out in a clumsy manner on 99.

Shai The West Indies Hope: West Indies top-order had failed to get going yet again in the second innings. There was a sense of urgency in the Caribbean camp as they were looking for one more hero, other than Chase who could provide stability to the falling innings. And the hosts found their hope in Hope. He stood strong against a dominating pace attack from Pakistan.

There were also rough patches around the crease and Yasir was having a gala time pitching the ball in those areas bowling from around the wicket. But Hope demonstrated the meaning of dead batting. He shuffled across the crease using his feet accurately adjusting himself. He fell 10 short of scoring his maiden Test hundred. The worth of his 90 eventually decided the fate of the game.

Yasir Shah s 7: Yasir Shah is a second innings giant. He knows how to utilise the conditions and bowls according to the plan. On Day Four, West Indies were in full control and Yasir had leaked runs. But Misbah persisted with his strike bowler and just when it felt like West Indies had taken the game away from them, Yasir struck. Out of the 10 West Indies wicket, Yasir took 7 conceding 94 runs in 39.5 overs.

He tricked the batsmen by pitching the ball in the rough patches. He dished out his deceptive googlies keeping the Caribbean batsmen guessing.

Shannon Gabriel’s five-for that sealed it: Gabriel has spearheaded the West Indies Test bowling department for a brief period now. He has the ability to bowl a stringent line and with the new ball he can swing it either way and that too at a good pace. With Pakistan needing 188 runs on a Day Five wicket, West Indies were looking for that one opening early on and they got it with the wicket of Azhar. And what followed later was sheer brilliance by the Caribbean side. Gabriel who had bowled too many no-balls in the first innings kept his front foot well within the crease and kept on taking wickets. He displayed great show of seam position, and swung the new ball both ways. There were hardly any instances in the second innings when erred.

He dismissed Azhar, Misbah, Asad Shafiq, Aamer and Yasir to finish with figures of 11-4-11-5. 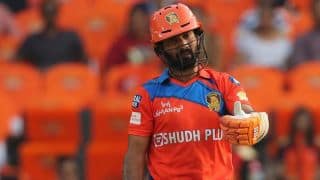 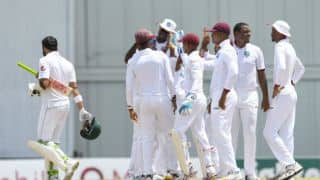