Parvez Rasool - a rose blooms in the beleaguered Valley

Parvez Rasool - a rose blooms in the beleaguered Valley

The curfew in the Valley hasn’t been lifted yet. Fear still grips the streets and silence continues to haunt most of his hometown. Parvez Rasool has risen from this gloom scenario to come into the collective consciousness of the cricketing cognoscenti with seven for 45 haul against Australia at Chennai’s Chinnaswamy Stadium. The curfew in the Valley hasn’t been lifted yet. Fear still grips the streets and silence continues to haunt most of his hometown. Parvez Rasool has risen from this gloom scenario to come into the collective consciousness of the cricketing cognoscenti with seven for 45 haul against Australia at Chennai’s Chinnaswamy Stadium.

Hailing from the beautiful ‘Town of Chinars, Bijbehara, a small town situated on the banks of River Jhelum, Rasool saga is worthy of being depicted on celluloid. Starting out by watching his father play the sport at district level, the 23-year-old Rasool took up cricket seriously playing for his school and state’s U-14 and U-16 team followed by his Club cricket representation for Bijbehara Sports Club, a prominent base for South Kashmir cricketers. But his big break came when he shifted base to Srinagar, playing for Srinagar Sports Club which led to his selection in Jammu & Kashmir Senior team in 2008.

But, the coming of age for this young cricketer came three seasons later when he plundered 594 runs and scalped 33 wickets in 2012-13 Ranji season to be rewarded with a selection to the India A side against England in November last year —  the first cricketer from the valley to have the honor of playing against an international team. Not just that, he was hand-picked to bowl at the nets to the senior Indian team, ahead of India’s third and final game against Pakistan in December 2012 and in the process getting to rub shoulders with Mahendra Singh Dhoni and Virat Kohli.

The 11th season of the Border-Gavaskar Trophy, which starts on February 22 in Chennai, promises to be a nail-biting affair. The visitors have already got a whiff of what would be on offer this Indian summer. Harbhajan Singh has been picked on past reputation than present form, while Ravichandran Ashwin had a rather disastrous outing against England. Keeping the form of the two India spinners in mind, Rasool’s performance against Australia is most encouraging. The selectors are clearly looking to make bold choices, reflected in the selection of Ajinkya Rahane, Shikar Dhawan and Murali Vijay over the likes of Gautam Gambhir, Yuvraj Singh and Suresh Raina.

Dhoni has gone on record that it’s his desire of creating a pool of players for 2015 World Cup. Rasool’s batting average of 38.57 (three hundreds and two fifties from seven First Class matches) and 33 wickets with economy rate of 3.04 this Ranji season would help his case.

Amid the gunfire and bloodshed in the Valley, Parvez Rasool has given much cause for smiles for his troubled people.

(A big fan of MS Dhoni, Rugved Damle has played for his State’s Under-14 and Under-16 teams. He is fascinated by the use of technological innovation in sports and writes on things that are game-changing. Rugved blogs at http://www.helicopter-shot.com/ and can be followed on Twitter at https://twitter.com/Rugved14) 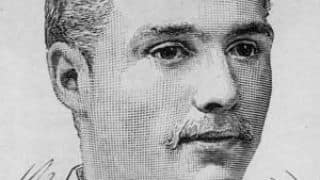