Perth Scorchers need to beat Lahore either by a 47-run margin or with 33 balls to spare.

Perth Scorchers take on Lahore Lions in the 19th match of the Champions League T20 (CLT20) 2014 at Bangalore on Tuesday. The equation is simple for Lahore Lions, who need to beat Perth either by a 47-run margin, or with 33 balls to spare in order to better Chennai Super Kings‘ (CSK) net run-rate and qualify for the semi-finals. Shiamak Unwalla looks at the likely team the Scorchers will field to try and halt the Lions’ charge.

Top order: Craig Simmons and Adam Voges ought to continue in their roles as openers. Simmons has been consistent without being explosive so far in CLT20 2014, and will look to set the record straight in his final appearance. Voges was in top nick against Kolkata Knight Riders (KKR), and scored a few runs in the last game against Chennai Super Kings (CSK) as well. Sam Whiteman, who could bat at No 3, started well for the Scorchers but failed to kick on after that. The left-hander has shown a lot of talent, and he would like to deliver against Lahore.

Middle order: Led by Mitchell Marsh, with Ashton Turner, Ashton Agar, and the hard-hitting Nathan Coulter-Nile, the Scorchers’ middle order might not be high on experience, but it is a power-packed one that could instil some fear into the opposition. Marsh has failed to recreate the magic of his innings against Dolphins, but he remains a potent threat for any side. Agar, Turner and Coulter-Nile can all strike the ball well, and would be looking to bring out the big hits to throw the Lions’ bowlers off.

Lower order: Brad Hogg, Yasir Arafat, Joel Paris, and Jason Behrendorff form the crux of the bowling line-up. Hogg and Arafat are not too shabby with the bat in hand either. The bowling line-up boasts of experience as well as youth, and the opening duo of Paris and Behrendorff has shown the ability to rock sides early on. Marsh, Agar and Voges can contribute with a few overs as well, if needed. All-in-all, the attack looks like a settled one. 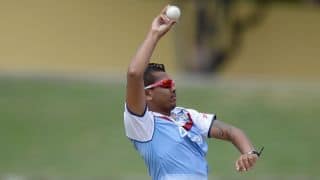