It has been a year since Phillip Hughes was struck on the back of his head. None of us have recovered from the blow.

November 25, 2014 started off as an unremarkable day. I was not supposed to be at work; it was my weekly off day, but I swung by the office to pick something up. Having switched on my computer, I logged on to Twitter. Scrolling through, I came across someone wishing a cricketer well following an injury. After further search I gathered that Australian batsman Phillip Hughes had been hit on the head while batting. He was unbeaten on 63 at the time. Since he was in good form and had a realistic chance of making it to Australia’s squad for the Test series against India, I remember thinking something along the lines of “Ouch. I hope he doesn’t miss out on the first Test.” READ: Phillip Hughes’ death: Cricket resumes, but with a heavy heart

I asked one of my colleagues to cover the news and set off for home, not particularly worried. After all, head injuries were not uncommon in cricket; Bert Oldfield had been struck on the temple by no less a bowler than Harold Larwood. Denis Compton was hit by Ray Lindwall. Bert Sutcliffe was smashed by Neil Adcock. Mike Gatting had his face mangled by Malcolm Marshall. The most serious injuries were faced by Nari Contractor off Charlie Griffith and Craig Cumming off Dale Steyn, but even they both made full recoveries. These were all express pace bowlers, while Hughes had been struck by Sean Abbott, a medium-pacer. Nothing to be worried about, surely.

On the way home I thought about Hughes. I remembered mistaking him for Phil Jacques early in his career due to their similar names and the fact that he too was a left-handed opening batsman. I had a recollection of him doing well in South Africa but struggling in India. He had recently hit a List A double century. “He should be up and about in a few days.” READ: Phillip Hughes: Rest in peace

By the evening, the lack of worry abated. Reports of Australian players visiting him in hospital made things seem more serious. He was unconscious. The entire Sheffield Shield round was scrapped. This was no longer a small matter. “He should be up and about in a few days” became “I hope he is up and about soon.”

For a couple of days there was no news. Then, on November 27, reports of a fractured skull surfaced. I was at work, and monitoring Twitter. Moments later, I saw the dreaded tweet from Cricket Australia. “We are extremely sad to announce that Phillip Hughes has passed away at the age of 25.” READ: Phillip Hughes: A brief look at the career of one of Australia’s most promising talents

My immediate response was of shock. It was a bit surreal; a cricketer passing away from a head injury picked up while batting? I announced the news to my colleagues. The chitter-chatter that is always present ended immediately. Someone said “No, no, no, no, no.”

We had to get the news out. Someone sent out a tweet. Someone started drafting out the news. No one said a word. We called our colleagues who were not present in the office. Some had to be woken up. Articles had to be written. I do not remember the newsroom ever being so silent. No one spoke unless they had to. The hustle and bustle that is usually a staple of any newsroom was absent. READ: Hughes’ funeral: Bidding adieu to the “little” giant

Michael Clarke made a statement. He could barely get through it without breaking down. We broke down with him. This was unreal, unbelievable. Hughes was probably no one’s favourite cricketer. He was talented, but nothing standout. He would never be thought of as great. And yet, his death had hit closer to home than anyone would have imagined. He should have been battling for his spot in the team, not for his life. He ought to have been cutting and pulling, not making grown people cry.

There was very little laughter in the office for the next few days. We had to cover the funeral live. Clarke once again made us weep. “I stood there at the wicket, I knelt down and touched the grass, I swear he was with me; picking me up off my feet to check if I was okay. Telling me we just needed to dig in and get through to tea.” There were four of us in the room when Clarke delivered the eulogy. I do not remember which of us were crying. It might have been all of us. READ: Phillip Hughes: Funeral in the newsroom

It has been a year since Phillip Hughes was struck on the back of his head. None of us have recovered from the blow. Complete coverage of Phil Hughes’ tragic demise 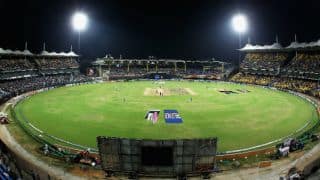