Post-Argus review, Australia is well on the road to success

Post-Argus review, Australia is well on the road to success 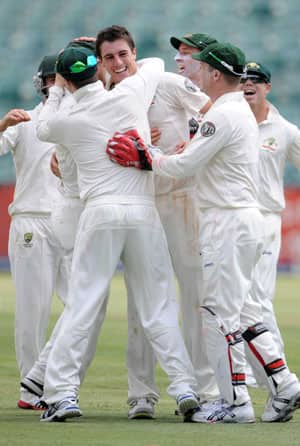 Who says Test cricket is dead?

On Saturday night I watched the final few overs of India‘s third Test match against the improving West Indians. After three and a half days of batting dominance the game took an entertaining twist. Fortunes were reversed and the ball started to dominate the bat on a deteriorating pitch that had began to wear and spin.

As fate would have it, the match went down to the very last ball. A run out in the final seconds made for a heart pounding climax.

After five days in the Mumbai heat, the result was a draw; but what a draw it was! Any viewer who tells me they weren’t riveted to the drama of the final hour must have been watching a different ball game than the one I was engrossed in. Sure there was no winner or loser, but Test cricket was the victor once again.

In the last three weeks Test cricket has provided wonderful entertainment to any cricket lover; regardless of their alliance. The freakish events of day two in Cape Town had everyone scratching their head in disbelief, marveling at the intriguing twists and turns of Test match cricket.

What other game in the world can throw up so many questions in the space of six, 12, 24 hours?

If Cape Town wasn’t enough, Australia‘s back to the wall, record-breaking run-chase in Johannesburg a week later was a testament to the character of the Australian players who had been rightfully smashed by the media and public for the debacle of Cape Town. To their great credit, the Australian’s took this barrage on the chin, shook themselves off, dug deep, searched thoughtfully and then fought back with courage and dignity.

There was a lot less said about that brilliant feat, but I guess that is the way of the world today.

Either way, Test cricket again provided a wonderful show case for the game. If nothing else, the raw emotion of Nathan Lyon waiting to bat was entertainment in itself, while the pure elation and natural talent of the 18-year old Pat Cummins making his debut was a brilliant sight.

Many pessimists insist Test cricket is dying, some even say it is dead. They point to the decrease in crowds is some parts of the world and the emergence of 20/20 cricket universally.

In terms of crowds, it must be remembered that Test cricket is played over five days and that in this fast world we live in, many people can’t afford the expense, or the time, required to frequent every day of the match. That said, the unique nature of a Test match means that many people are still enthralled by the events of the game, whether they are there or not. With the start of a new Australian summer upon us, the ABC commentary and television coverage means that Test cricket becomes a part of the fabric of our Australian summer. People don’t have to be at the ground to recognise that the Australian Test team is locked in battle with New Zealand or India. Over the next two months the airwaves will be alive with cricket, Test cricket, and that is great. Test cricket is alive and well, not dying.

The Australian cricket team that will take the field at the Gabba – this article was written before the start of the Test against New Zealand – is different than the one we have seen in the past. Potentially four young players will receive their baggy green caps for the first time.  That’s unprecedented. At the same time, it’s a fantastic opportunity to unleash four talented young Australian cricketers.

For some time people within the inner sanctum of Australian cricket have talked about the depth of young, fast bowling talent that is emerging. On Thursday we might see James Pattison, Mitchell Starc and Ben Cutting showing off their talents to the cricket world. All offer athleticism and natural ability. They are also craving an opportunity.

With 18-year old Pat Cummins making his highly successful debut in South Africa a fortnight ago, the competition is rising for a position in this coveted first eleven. Injuries to Ryan Harris and Mitchell Johnson have opened up a shot at the big time for these three youngsters. This is not only exciting in the short term but also very promising for the depth of our stocks in the longer term.

The debut of David Warner is also another excellent story for Australian cricket. Only 12 months ago the perception of Dave Warner was one of a 20/20 ‘basher’ who had no chance of ever playing the longer form of the game. An immense talent, Dave has proven what can be achieved with single-minded determination and focus and I am really looking forward to watching him play in this Test match. His rise is a testament to his awesome competitive spirit which will hold him in good stead to be successful at this level. Marry his batting ability with his exceptional fielding prowess and I would suggest Dave Warner could be a fascinating and popular selection in this Australian cricket team.

Since last summer much has changed. After losing the Ashes, things had to change and they have. The Argus review defined the direction to be taken and we have seen some successful results over the winter.

Winning in Sri Lanka was a worthy achievement, as was the ODI and Test series in South Africa. It is never easy to beat good teams on their home soil and yet we were able to do this twice in out last two series. Like the Test cricket pessimist, it would be easy to perceive that doom and gloom invades Australian cricket, but this is far from the case.

Positive steps have been taken to improve our performances and I have no doubt we are going in the right direction. Besides a two-hour debacle in Cape Town there has been plenty to be positive about with this group. A spate of injuries is disappointing, but if the last six months is anything to go by, the Australian cricket team will continue to rise to the challenge.

A new cricket manager, coach, captain, manager and selectors have been put into place and while none of them are fairy Godfathers who wave magic wands they do provide a collective group of cricket and administrative brains to set a clear direction for the Australian cricket team.

Thursday truly is the new age of Australian cricket and I am looking forward to seeing what we have in the cupboard for now and the future.

Preview: India look to guard against complacency in second ODI