Rahul Dravid and VVS Laxman unknowingly stepped out of cricket for the final time on January 28, 2012. Abhishek Mukherjee looks at the day that marked two of the most low-key departures in the history of the sport.

The series had been lost already; the only thing that was left to be seen was whether India would be whitewashed and humiliated at Adelaide. India had already been steamrolled by England at their den: could they at least save face in Australia?

To add to India’s woes, MSDhoni was ruled out of the Test for a ban that had been dished out to him for slow over-rates. Wriddhiman Saha, India’s perennial reserve wicket-keeper on tours, had to be drafted in, and Virender Sehwag went out to toss the coin.

India started well: Sehwag made the smart decision of bringing Ravichandran Ashwin early and at 84 for three it had seemed that India might just find  their way in the Test but Michael Clarke joined Ricky Ponting and both batsmen slammed double-hundreds with their 386-run partnership blowing India out of the Test.

The torture was put to an end when Clarke declared the innings closed at 604 for seven. Peter Siddle removed Sehwag early, and in the next over Ben Hilfenhaus bowled one that took Rahul Dravid’s elbow: it went on to hit the stumps. Dravid was bowled for the sixth time in seven innings. India finished Day Two at 61 for 2, already fighting to save the Test.

Gautam Gambhir and Sachin Tendulkar had a torrid time the next morning, and a couple of blows from Siddle pegged the Indians back again. VVS Laxman gave in to Nathan Lyon’s persistence and played a casual stroke, only to be caught-behind, and India were reduced to 111 for 5.

Young Virat Kohli then came to the party with the resilient Saha for company. The youngsters showed their senior counterparts on how to tame the Australians, adding an aggressive 114 in quick time. Kohli pierced the field with his dazzling strokeplay, bringing connoisseurs to their feet: it was evident that a talent has arrived. Saha, on the other hand, turned out to be the perfect foil, thus allowing Kohli to go after the bowling.

The partnership came to an end when Saha left one from Harris somewhat dangerously. Ashwin and Zaheer Khan followed soon after (the wickets off consecutive balls gave Siddle his five-for), but Ishant Sharma hung around, allowing Kohli to score his maiden Test hundred. He was last out to a standing ovation from the huge ground, but could not help India from conceding a 332-run lead.

Clarke decided to bat on. Once again Ashwin was brought on early and just like the first innings, the off-spinner struck twice, Australia lost three early wickets (this time for 40), but the lead was simply too huge  to overcome. Ponting and Clarke added 71 and the Australians declared their innings closed at 167 for 5, setting India a target of exactly 500.

The blow that finally got The Wall

There was neither an ovation nor an applause (other than the celebrations) when Gambhir edged one to Brad Haddin off Harris for 3. Dravid strode in for the last time in international cricket — only that no one was aware of the fact till then. The erect frame made its way to the centre: the head was upright,  jaws gritted with determination,  face grim as ever; nothing about him was different from the Dravid the fans have worshipped over the years.

Dravid began in solid fashion as Sehwag went berserk at the other end, taking the seamers for five boundaries in nine balls. He played cautiously for 15 balls before Siddle found his edge: the ball dipped on Haddin and fell just short of him; the ball sped towards the long boundary of the Adelaide Oval as Dravid ran a three.

Hilfenhaus pitched one short outside the off-stump, and Dravid went after it; the ball raced through cover as the fans cheered. This was the Dravid of his heydays, rock solid but not willing to let a single loose delivery go. Then the unthinkable happened — perhaps due to an influence of an outrageous Sehwag at the other end: as Lyon tossed one outside off-stump, Dravid went on his left knee and slog-swept it — almost crudely — past mid-wicket for four.

Sehwag dazzled  before hitting a Lyon full-toss to Ponting at short cover. His 62 had taken 53 balls and had included 12 boundaries. Tendulkar played cautiously, and yet again Adelaide got to see Dravid at his vintage best when he flicked Harris beautifully for a boundary. It seemed like  a comeback was on the cards.

Harris started a fresh over; the first ball was pitched outside the off-stump, and Dravid, in a moment’s lapse of concentration, went for an expansive drive. The ball pitched marginally wider than he had expected, and the thick edge carried to Michael Hussey at gully.

What a sight it made when Laxman and Dravid crossed each other as one walked in to replace the other at the crease for the final time! Between them they had crafted many a partnership — two iconic ones against the same opposition — to win or save Tests for India. But now they had to have a go at them separately.

Tendulkar, of course, had seen it all: like many a time before, he got to bat with both legends in their final innings. Like Dravid, too, Laxman edged one early in the innings but the ball raced between Haddin and the first slip for four. Lyon took out Tendulkar shortly afterwards, which brought Kohli to the crease.

After the first innings there had been talks of promoting Kohli to five: here, too, he started confidently while Laxman prodded along with a single here and a brace there, punctuated by the most innocent of smiles in world cricket. He could well have been out on an afternoon’s stroll in the park.

Then Lyon bowled one good length a shade outside off-stump; Laxman read the ball early and shifted his bodyweight back so fast, it seemed that the ball would never reach him; the cut was so late that it could well have been off Haddin’s gloves; of course there was no one at point to stop the ball.

Just as things looked safe and serene as Laxman he committed an error — the way he had done so often in his illustrious career: Harris took the ball slightly away, Laxman drove lazily, and the ball flew to Ponting at second slip — who, of all people — grassed the chance. Laxman lived on.

Thus reprieved, Laxman flicked Harris past square-leg for four, and when Clarke tossed one on off-stump he simply stretched his left leg forward: the execution of the stroke was perfect, and the ball raced between mid-off and extra-cover.

A few hearts prayed in hope — an emotion the Indian supporters had forgotten since they had landed in England in 2011. Realising the futility of it all, Clarke took himself off and brought back Lyon: the first ball, tossed up outside off-stump, was let go safely.

Then came the ball that claimed him — or rather, the ball which he chose to get out against; it was a nothing delivery — almost a long-hop outside the off-stump; Laxman rocked back and tried that elegant flick through mid-wicket, but could not keep it on the ground. The ball went straight to Shaun Marsh at short mid-wicket.

A few hearts skipped a beat. Laxman stood there, with the same post-dismissal confused look his fans had got so used to over the years. He waited for a second and then took the long walk back, his strides slow but elegant: he had, after all, done nothing crude in his career that had spanned over a decade-and-a-half.

Dravid had scored 25 in his last innings; Laxman, ten more. They would never play in Australia again. They would not play international cricket, either.

– India had a spectacular collapse after Laxman’s dismissal, losing four wickets for eight runs. They eventually folded for 201 runs an hour into Day Five, losing by 298 runs. They made it to the ground again during the post match ceremony with little to look forward to.

– Just over a month later, Dravid announced his retirement from international cricket. Later that year, in August, Laxman followed suit. 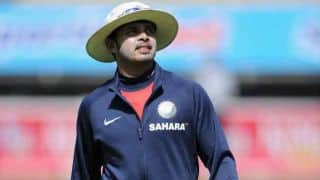 Sreesanth hoping to put 'bad phase' behind him after marriage