RR secured their passage through to the IPL 2015 playoffs.

RR openers get team off to a flyer: RR openers Shane Watson and Ajinkya Rahane came out to open the innings with positive intent. Watson was looking at his menacing best and Rahane was giving him good support, at the same time putting the bad deliveries away. They brought up the team’s fifty in the sixth over and the partnership grew from strength to strength from there. IPL 2015: Complete coverage

Ajinkya Rahane’s run out: Rahane had gotten off to a good start. His innings was unfortunately cut short after he was run out at the non-striker’s end, while he was attempting to go for a second run. He scored 37 off 22 deliveries with three fours and two sixes punctuating his innings.

Shane Watson’s second IPL ton: Shane Watson dominated the KKR bowlers, smashing them to all parts of the ground. He brought up his century off 57 deliveries. He scored nine fours and five sixes during his unbeaten knock of 104. Perhaps relinquishing captaincy has had a positive effect on his batting.

KKR get off to a bad start: Robin Uthappa and skipper Gautam Gambhir were dismissed within three overs with only 21 runs on the board. Gambhir went for just one and Uthappa was dismissed for 14. Another wicket at that stage could have proved disastrous for KKR.

Chris Morris’ game changing over: Morris has had a decent season for RR and this was his night. In the 14th over he picked up the wickets of the dangerous Russell and Suryakumar Yadav in the same over and got RR back into the game. He finished the game with figures of four for 23 , which proved to be a match-winning effort eventually.

(Pramod Anath is a reporter at CricketCountry. He has represented Karnataka table tennis under-15, and is a hardcore supporter of Liverpool FC. His Twitter handle is @pramz) 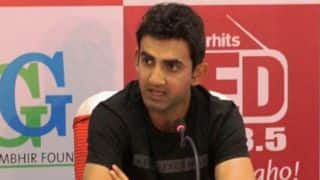