Former champion, Rajasthan Royals (RR) pulled out a thrilling victory over defending champions, Kolkata Knight Riders (KKR), as they beat them by nine runs, in Match 54 of the 2015 Indian Premier League (IPL) at the Brabourne Stadium in Mumbai on Saturday. Shane Watson‘s blistering knock of 104 and Chris Morris‘s four for 23 helped RR register the fantastic win, as they qualified for the playoffs. IPL 2015 Points Table

Earlier, RR skipper, Steven Smith won the toss and elected to bat first on a flat batting track at Brabourne, as they finished on a challenging total of 199 for the loss of six wickets in 20 overs, owing to Watson’s brilliant knock of 104. Smith made three changes with Pravin Tambe, Rajat Bhatia and Ankit Sharma being replaced by debutante, Brainder Sran, Dhawal Kulkarni and Stuart Binny, while KKR skipper, Gambhir makes a chnage in the form of Azhar Mahmood, coming in for Sunil Narine. LIVE Scorecard: Rajasthan Royals vs Kolkata Knight Riders

KKR began the chase on a shaky note, as openers, Gambhir and Robin Uthappa just put eight on the board, when the skipper fell for a mere single to fast-bowler, Morris in the very first over, after getting caught by Binny at point. Out came Manish Pandey, and put 13 more runs, before Uthappa too departed for cheap 14 to Dhawal Kulkarni after being caught by Smith.

However, it was the next pair of Pandey and Yusuf Pathan, that put up a healthy 56-run stand for the third wicket, with Pandey contributing 18 and Yusuf contributing 28 in the stand. The 50-run stand came in just 28 deliveries, owing to some big hitting from both the batsmen, before Pandey fell for 21 to Kulkarni at the score of 77, after being caught by Morris.

It was followed by another healthy 55-run stand for the fourth wicket between Pathan and explosive all-rounder, Andre Russell. Both contributed 15 and 37 respectively, as the 50-run stand came up in just 27 deliveries, resulting to some powerful hitting from both the explosive batsmen. KKR were maintaining a good run-rate, as they brought up their 50 in just 5.3 overs, as well as their 100 in just 10.3 overs. LIVE Updates: Rajasthan Royals vs Kolkata Knight Riders

However, Russel fell for 37 at the score of 132 in 14th over to Morris, after being caught by Kulkarni again. His dismissal led to the arrival of Suryakumar Yadav, but was dismissed in the very first ball after being caught behind by Sanju Samson off Morris. It was followed by a 19-run stand between Yusuf and Bangladesh’s star all-rounder, Shakib Al Hasan. Just when it seemed, Yusuf was steering towards a big total, as well as his half-century, he fell for 44 to Shane Watson, after being taken by Kulkarni at long-off, as the score read 136 for six.

Out came all-rounder, Mahmood, but could only manage six runs, and fell to all-rounder, James Faulkner, after being caught by Ajinkya Rahane off a high catch at long on. It led to the arrival of Piyush Chawla, but he too fell for a golden duck to Watson, as he was caught by Binny at point.

Umesh Yadav came to support Shakib, and contributed interesting 25 runs, before Shakib fell in the final over for 13 to Morris, after being caught by Smith. With 16 requiring off the last five deliveries, it was Morne Morkel who was out in the middle, but it was too late as they couldn’t put on the required runs, and succumbed to a nine run defeat. 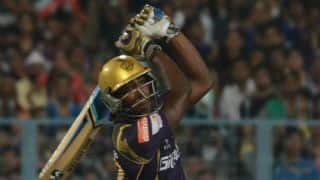 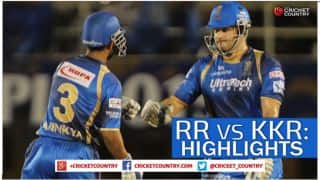