Check the Points Table of the IPL 2015 here.

The Indian Premier League (IPL) is in its the eight edition. IPL 2015 this year also has eight teams eyeing the title. The opening fixture will be Kolkata Knight Riders (KKR) hosting the Mumbai Indians (MI) at Eden Gardens, Kolkata. Gautam Gambhir will be hoping to defend the IPL title as they head into the tournament as favourites. The final will be played on May 24 at the very same venue as the opening fixture. READ: Orange cap holder in IPL 2015

In 2014, Kings XI Punjab (KXIP) were the table toppers winning 11 games while Delhi Daredevils (DD) languished at the bottom with just a couple of wins on board. The team that wins will get two points and the top four teams at the end of the first round — which is all teams having played their home and away games — will go into the Play-Offs. READ: Purple cap holder in IPL 2015

The leading run-scorers in the tournament will be awarded with the Orange Cap, and the leading wicket-takers of the IPL 2015 will be given the Purple Cap. READ: Most dangerous batsmen in IPL

*This table was updated after Match 56 of IPL 2015 between Sunrisers Hyderabad and Mumbai Indians. 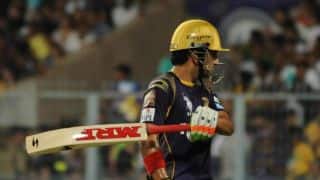