Adam Voges, Peter Nevill and Mitchell Starc were Rangana Herath's victims as he took a hat-trick on Day Two of the second Test between Sri Lanka and Australia.

They say age is just a number. Sri Lanka’s slow left-arm orthodox bowler, Rangana Herath has time and again proved it in the last few years, becoming the oldest cricketer to take a Test hat-trick, at 38 years 152 days. His hat-trick against Australia at Galle on Day Two of the second Test, was yet another instance when he proved his brilliance with the ball. Adam Voges, Peter Nevill and Mitchell Starc were the victims of his tricks with the ball this time. Though, not only the fact that he picked up his hat-trick and became the second Sri Lankan to do so in Tests was a treat to watch, it was that little smile on his face that was worth watching. He had achieved a monumental achievement right where he had made his Test debut in 1999. At Galle. LIVE CRICKET SCORECARD: Sri Lanka vs Australia 2016, 2nd Test at Galle

The road for Herath has never been easy over the years. Coming out of Muttiah Muralitharan’s shadow could never have been easy. He had to make a name for himself and he has. Not only has he delivered for his side when they needed his services, he has become their go-to bowler. READ: Rangana Herath’s hat-trick rattles Australia in 2nd Test at Galle

With immense faith in his line and accuracy, he has continued to carry Sri Lanka’s spin bowling department on his aging shoulders. While he might have been getting old, somehow his ability to bowl long-spells has kept on increasing. And not only can he bowl long spells, he can take wickets, which is the most important target for a spinner to live up to.

What Herath did on Day 2 at Galle might not look a very big achievement as it didn’t come against a batting line-up that is top-notch against spin bowling. Australia’s collapse and them being stunned by spin, is clearly evident of the fact that, they badly need to improve their game on turning wickets. Herath just made most of their inability to play spin, and by the look of things, his hat-trick might well be the game-changer while handing his side a first-ever series win against Australia in Test cricket.

But from Sri Lanka’s point of view, there are young spinners in the side who would have seen Herath, his skills and his temperament most importantly. Success would only taste sweeter if they would have taken some learning out of Herath’s magic.

Dilruwan Perera and Lakshan Sandakan have shown massive potential and look promising for the future. While Sandakan was impressive in the first Test, Perera also claimed four wickets alongside Herath in the Australian first innings. And Herath might not stay for too long now. If Sri Lanka look at the bigger picture, Herath’s experience is of utmost value for the young spinners. Soon the burden of responsibility will fall on them.

Well nonetheless whatever happened at Galle was perhaps meant to happen. It was the same story yet again. Herath rattled another opposition. As always, he made it look easy, gave his team an advantage and proved why age is just a number.

Is everything fine between Adam Zampa and CPL opponents? 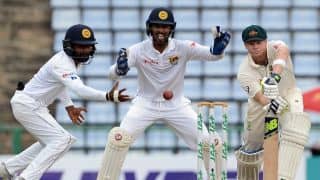