Ranji Trophy 2017-18: A season full of firsts for Vidarbha

Ranji Trophy 2017-18: A season full of firsts for Vidarbha

No one backed Vidarbha to lift the Ranji Trophy this season. However, Vidarbha coach Chandrakant Pandit believed in that right from the beginning. According to reports in The Indian Express, Pandit was quoted asking Prashant Vaidya, former Indian cricketer and current Vice-President of Vidarbha Cricket Association how will the prize money be shared? in July. Even captain Faiz Fazal was curious to find out how heavy the trophy was. In the end he did find out in the best possible way: 15 kilo hai yelled someone as the nation saw Vidarbha lifting the Ranji trophy.

Vidarbha was included in Group D along with Bengal, Punjab, Himachal Pradesh, Chhattisgarh, Services and Goa. They finished as the group topper with 4 wins and 2 draws. The draws came against Chhattisgarh and Himachal Pradesh. Let us relive the journey of Vidarbha to an epic victory.

Vidarbha faced Punjab on their home ground in their first match of the season. The Vidarbha bowlers did well to wind up the Punjab innings to 161. Sanjay Ramaswamy (161) and Ganesh Satish (164) helped Vidarbha take a lead of 344. They won the match by an innings and 117 runs.

Vidarbha won the toss and put Chhattisgarh in. Chhattisgarh posted 489 with Amandeep Khare scoring a double century. Vidarbha were then all out for 435 with their captain Faiz Fazal scoring a century. Time ran out by the time Chhattisgarh reached 195 for 9 in their second innings.

Fazal scored yet another century which helped Vidarbha to post 385. Akshay Wakhare picked up 5 wickets reducing the Services innings to 317.

Vidarbha then seized the opportunity and declared their second innings on 223 giving a target of 291 runs. Wakhare bagged five wickets again helping bowl out Services for 99. Vidarbha won by 192 runs.

Vidarbha posted a huge 499 after they were put in to bat by Bengal. Fazal and Ramaswamy built a partnership of 259 for the opening wicket to, convincing Bengal that their decision had backfired. Aditya Sarwate contributed 89 runs coming to bat at No. 7. Only two Bengal batsmen managed to score half-centuries as they got all out for 207 and had to bat again.

In their second innings Bengal managed to score 306 but could only post a target of 15. The Vidarbha openers finished te game in balls.

Goa failed to set a good total after electing to bat first. Keenan Vaz (72) was the only batsman who could manage to score more than 50. Wakhare shone again with his performance with a total of 9 wickets (4 in the first innings, 5 in the second).

Wasim Jaffer then scored a brilliant 158. Satish also hit a century taking Vidarbha s score to 427 for 3 as they declared their innings.

Vidarbha bowlers did well to bowl out Goa for 151 runs securing a win for their side by 37 runs.

Himachal Pradesh managed to score 353 in the first innings after they were put to bat. Rajneesh Gurbani took 6 wickets, winding up the tail.

Fazal then led from the front building a 264-run first-wicket partnership with Ramaswamy, who scored a century. Rishi Dhawan picked up 4 wickets for Himachal.

Himachal Pradesh batted the day out with the end score being 323 for 8. The match ended up in a draw.

Vidarbha did not lose any match in the group stage which took them to the top of table in Group D with 31 points.

It was the first time Kerala had made it to the Ranji Trophy quarter-final while Vidarbha were making their third entry. Both teams were aiming for their maiden victory in the knockout stage.

Vidarbha did not have the start they would have wished for. Half their line up was in the pavilion with a mere 87. They only managed to post 246 as KC Akshay took 5 wickets.

Vidarbha bowlers didn t disappoint. Gurbani, star performer in the last match, picked up 5 wickets, bowling out Kerala for 176. Vidarbha didn t miss out in the second innings. They posted a huge 507 before declaring. The 578-run target for Kerala was next to impossible. Vidarbha even had the first-innings lead.

Aditya Sarwate was the star bowler for Vidarbha as he bagged 6 for 41, his career-best. Kerala were bowled out shortly as Vidarbha won outright, entering the semi-final for the first time.

Karnataka stepped in to the semi-final by defeating Mumbai by an innings and 20 runs. They dominated the knockout match finishing it in just four days.

Vidarbha failed to score in the first innings after electing to bat. They could only manage 185 with no batsmen reaching fifty and Abhimanyu Mithun taking 5 wickets. Then Karun Nair (153) gave Karnataka a first-innings lead of 116. Gurbani took 5 wickets.

The middle order stood strong for Vidarbha in the second innings with Satish scoring 81. Vidarbha posted a target of 197. At this stage Karnataka were firm favourites for the final, but Vidarbha fought against all odds. Gurbani picked up 7 for 68. His brilliant bowling figures ensured a 5-run win for Vidarbha.

Siddhesh Neral and Umesh Yadav picked up the first 3 wickets but after that it was Gurbani all over. Vidarbha had already made it to the semi-final for the first time; and now they even made it to the finals.

Just like Karnataka, Delhi had advanced to the next stage by defeating their opponent Bengal by an innings. Gautam Gambhir was in good form as he struck 127 in the semi-final. Navdeep Saini, their strike bowler, was named Man of the Match for his 7 wickets. Delhi, seven-time champions, were the obvious favourites.

Vidarbha had already raised quite a few eyebrows throughout the tournament. The team was confident, very high on self belief and ready to give their all to win their maiden Ranji title creating history.

Vidarbha elected to field in the finals with debutant Aditya Thakare dismissing the semi-final centurion for a duck in the first over. Delhi were soon reduced 30 for 2 when Gambhir fell to Wakhare as well. Gurbani took over from there, taking 6 wickets including a hat trick. He became the second player overall to take hat trick in Ranji Trophy final and the only Vidarbha bowler to do so. He ended up with 6 for 59 as Delhi were bowled out for 295. Dhruv Shorey was the highest scorer for them contributing 145.

Vidarbha s top three batsman scored 176 among themselves but the star performer for them was Wadkar who smashed 133 coming to bat at seven. Sarwate (79) and Neral (74) played crucial important knocks as well as Vidarbha took a lead of 252.

Delhi s opening pair failed in the second innings as well. Shorey and Nitish Rana scored 62 and 64 respectively. At one point it seemed that Vidarbha would win by an innings, but Vikas Mishra s cameo allowed Delhi to get past the lead and set a target of 29 runs.

Fazal missed the chance to hit the winning runs for his team. Jaffer scored a run-a-ball 17, hitting the winning runs as the players from the dressing-room ran to the centre to celebrate. Vidarbha registered their first Ranji title. Rajneesh Gurbani was named Man of the Match in the final for picking up 8 wickets in the match.

Ye kya fast bowling karega (what fast bowling can he do)? was a remark made by a Vidarbha selector on Gurbani, according to reports in The Indian Express. Gurbani has left nothing to prove after his splendid performances in knockout games. He picked up a total of 27 wickets in the knockout matches with an economy of 14.11. He was also Man of the Match thrice.

Gurbani finished the season with 39 wickets in 6 matches. Only Jalaj Saxena of Kerala has taken more (44) than him (playing two more matches). Fazal (912) and Ramaswamy (775) became the second- and third-highest run scorers in the season, after Mayank Agarwal (1160).

Coach Chandrakant Pandit mentioned how he believed that Vidarbha had talented players but lacked in confidence, especially during knockouts and in pressure situations. Pandit took efforts to instil self confidence in players to make them believe they were not underdogs and can win against any team. He organised activities apart from training sessions to help create team bonding.

The win was an equal contribution from all the players and extra efforts put in from Pandit, bowling coach Subroto Banerjee and on-field guidance of Wasim Jaffer.

Vidarbha won their maiden Ranji Trophy title. They also became the 18th team to win it. This is the very first time they went pass the quarter-final stage.

Gurbani became second Vidarbha bowler to take a hat trick in the finals. Vidarbha did not lose a single match in the season. This was their journey to maiden Ranji Trophy title in 2017-18, a season full of firsts. 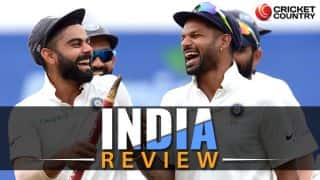