A permanent name in Mumbai s Ranji Trophy team for the seven years, and having led them to the title in the 2015-16 season, Aditya Tare knows what it takes to win. Tare, who was Man of the Match in the Vijay Hazare Trophy final which Mumbai won after 12 years, believes that the 41-time Ranji Trophy champions are in a very good space despite the absence of Ajinkya Rahane, Rohit Sharma, Shardul Thakur, Shreyas Iyer and Prithvi Shaw.

Ahead of Mumbai s Ranji Trophy opener versus Railways in Delhi on November 1, the outgoing captain spoke to CricketCountry.

Winning the Vijay Hazare Trophy after 12 years must have boosted the team s confidence.

We were struggling over the past two years in white-ball cricket, which I have spoken about before, so it is pleasing to see how we performed in this tournament. I am pretty happy with the way the team dominated the entire tournament, barring the final. The league games were all pretty one-sided and we only really got stuck in the final. For me, what stands out was the bowling unit. They made it quite easier for us to win matches. That is one department we were lacking in over the past two years. That is a great box to tick just before the Ranji Trophy. The bowlers look good which is a great sign for the team going into red-ball cricket.

I believe I was batting quite well, having scored some runs in the pre-season tournaments. The confidence was pretty good. Obviously we had a very top-heavy batting lineup with Ajinkya, Prithvi and Shreyas so the opportunities were scarce until the final. I didn t get to bat much, but was mentally ready to accept that there would come a situation where the top order might collapse and then it would be my responsibility as well as the lower middle order s to take the team through. I was ready and on the day [in the final against Delhi] it worked. I was pretty happy with that performance.

Shivam Dubey did very well in the Vijay Hazare final. He has played just one first-class game but in that he took five wickets and scored a fifth. He s shaping up to be a vital allrounder this season given the absence of some seniors, isn t he?

He s a perfect replacement for Abhishek [Nayar] who left us. He can fill that role for what Nayar was doing for us over the past five-six years which was batting well, scoring runs and picking wickets. That is the exact role that Dubey has. He s got the ability to fill Abhishek Nayar s shoes. Good quality with the ball, can swing it and bowls good areas and a terrific batsman as well. Hits the ball hard and long, so a great sort of replacement for what Abhishek Nayar was doing.

For me, even the role that Tushar [Deshpande] has he s bowling quick, hitting great areas, his ball is moving. Shams Mulani as well, another youngster in the team. At the moment the bowling is pretty young in terms of the number of games played but the positive is that all of our bowlers have hit form. It will be a great opportunity for us to do well in the Ranji Trophy.

Where do you see Mumbai right now? Rahane, Rohit, Shaw, Iyer and Shardul – five pillars of this team – are not going to be available for most of this year.

I feel we have already prepared expecting the better players to go on and play for the Indian team. Rohit and Ajinkya are always in the team, Shardul for the past two years has been in the setup, Shreyas is in and around the Indian team and now Shaw has broken through. We have to accept the we are going to be without these players, and that if they return it is great. But mentally, the senior players and coaching staff are ready to accept that we will miss them. I don t think anyone is thinking shit, we should have had Ajinkya in the team . We don t think that way. We prepare expecting them to be away and its a great opportunity for the young players to fill those big shoes. Thats how you build great bench strength.

There are still enough experienced players in the team. The way Dhawal [Kulkarni] has mentored the bowling in the one-dayers was great. He was always standing at mid-on and mid-off to look after them, asking them to bowl what he felt was right at that particular time. Its a blessing to have him in the team. He has vast experience playing for Mumbai for ten years, so as far as the bowling goes we have a terrific resource.

In the batting it will be Surya [Suryakumar Yadav] and myself taking responsibility in the middle order, so we have a good mix of experienced players and great and exciting talent. I m pretty optimistic about this season.

What about Siddhesh Lad, who has been around for a few seasons and earned a reputation of being Mumbai s crisis man?

He s got great temperament and a cool head on his shoulders, plus terrific ability. He s got what it takes to be a top-class player and I think his temperament is the best in the team. He s cool, always relaxed and gives that assurance that he will take the team through. Where he bats, he goes in when there s a lot of pressure because many times the team is in trouble. But he s consistently bailed the team out, which is outstanding.

Jay Bista has also come along well, despite being in and out of the team. Do you think he can cement his place?

We ve been looking at Jay for the past two of three years. He s been trying to cement his place, which unfortunately hasn t happened but he has gained more experience playing on the domestic circuit. Hopefully he can do well for himself and the team. The opener s slot is there to be cemented, with Akhil [Herwadkar] at one end. Jay has all the shots and if he can control himself a bit when the ball is doing a bit, he can be a great asset. He s young, a great addition as a batsman and he can bowl a bit of offspin. A package that the team requires. He just needs runs to get the monkey off his back.

How do you view the state of Mumbai cricket today?

If we don t win the Ranji Trophy, there is always talk of decline in Mumbai cricket. But the fact is that in the past ten years we ve almost won it four or five times. Every year or so you have one player going into the Indian setup Shardul, Shreyas and now Shaw. Its a great time for Mumbai cricket and we have to continue. Winning the Ranji Trophy is the aim. 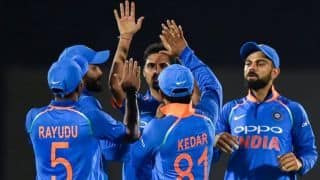