Rubel Hossain is the Bangladeshi version of Lasith Malinga (for Bangladesh fans, the next Shoaib Akhtar).

Dhaka: Rubel Hossain, the Bangladeshi version of Lasith Malinga (for Bangladesh fans, the next Shoaib Akhtar) has reportedly decided to apologise to Virat Kohli for his misbehaviour during ICC Cricket World Cup 2015 quarter-final. Rubel’s decision came just after the tweet of Anushka Sharma, in which the actress suggested Rubel to say ‘sorry’ to Virat in order to get an Indian Premier League (IPL) contract with Royal Challengers Bangalore (RCB). ICC Cricket World Cup 2015: Top 10 most memorable moments

Meanwhile Rubel’s quick reaction to Aunshka’s tweets has triggered a new controversy in Bangladesh. Naznin Akter Happy, who had accused Rubel of a rape charge and later withdrew the case as soon as the pacer bowled a match wining spell against England, is again thinking about reopening that case. ICC Cricket World Cup 2015: Top 10 spells

In an exclusive interview with Paji TV, she said, ‘Pola ta amar valobasare mullo dilo na. Ami or jonno Facebook a koto status update dilum, hala, akta reply porjonto korlo na, reply to dure thak akabar like o korlo na. R jomni oi Indian actress Tweet korlo, omni ki totporota i na dekhalo.O amay abar dhoka dilo. Amio ar jobab debo, Court a” [The fellow did not care for my love. I had posted so many good things for him in Facebook, he did not bother to reply, and neither did he ‘Like’ them. But as soon as the Indian actress tweeted, a prompt reaction had come from his side. This is cheating. I will drag him in the court room once again.] ICC Cricket World Cup 2015: The Associate XI

However, Bangladesh captain Mashrafe Mortaza has decided to start a huger strike against this decision of his fellow fast bowler. In a press conference at Mirpur (which was attended by 1,000 Bangladeshi reporters, 1,000 administrators of various Bangladeshi Facebook pages and 10 lakh Bangladesh fans) he declared his revolutionary decision. This one announcement has made Mortaza the most popular figure in the country and reports are coming that he might replace Sheikh Hasina as the new Prime Minister of Bangladesh. Mamata Banerjee, West Bengal Chief Minister, has already sent her good wishes and some ‘Misti Doi’ for the new leader of Bangladesh.  The general consensus in Bangladesh, however, is that they would have happier if she had shared a few more gallons of The Tista. ICC Cricket World Cup 2015: Moments that occurred for first time in a World Cup

No reaction has come from the side of Kohli. The Angry Young Man of Indian cricket has been extremely busy shaping a new hairdo which we will see in his upcoming advertisement. ICC Cricket World Cup 2015: Complete Coverage 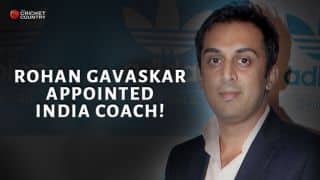